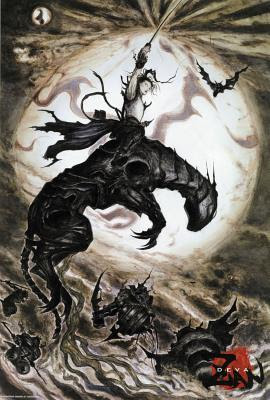 Summary:
In his forty year career, Yoshitaka Amano has illustrated many projects, becoming famous for Final Fantasy and Vampire Hunter D. But never before has Amano written the visions he depicts - never until now! Dark Horse has the honor to publish Deva Zan, Yoshitaka Amano's first fantasy novel as an author as well as an illustrator! An epic ten years in the planning, Amano has made Deva Zan as his personal expression of the legends of Asia for his Western readership. In esotevic Japanese Buddhism, twelve generals - the Juni Jinsho - stood guard over the cosmos at the points of the zodiac. But now they have vanished, and nothing stands between us and the forces of darkness but Deva Zan, a samurai without a memory. To restore order to existence, he must marshal not only his own fighting skill, but find companions that can cross the boundaries of time and space - to join him in a battle that will stretch from the fields of ancient Japan, to the streets of modern New York City - and to dimensions beyond human comprehension!

Review:
When I finished reading this book, all I could think was how does one review a book like this? Where to start? It's so unique, so different. I wouldn't call this really a graphic novel but on some level it is…. I guess an illustrated novel would be more accurate. Since the story is written in novel style...

The storyline is interesting and unfolds slowly. But it was a bit confusing in the beginning. To be honest I know very little about japanese mythology- so I am not sure if that's the reason for my initial confusion.
As the story of Deva Zan unfolds it becomes multilayered and get deeper and deeper as one reads. I found myself pondering on different questions. Is it right to battle and kill, if the cause is right? Does one desire power for just the sake of power or for a good purpose really? Destiny and choices- how do they correlate?
The story is told beautifully, really like an old fairy tale or like I imagine long ago myth were told to the younger generations around the fire.

The illustrations are mind blowing! Absolutely beautiful. Each a piece of art, each totally unique yet still in Amano's style. They underline the beauty of the story and enhance it.
I didn't expect anything else from Amano but he exceeded my expectations by so much! I knew that I will like the art work . I like his work usually. But this book in my opinion is his master piece so far!

This is the first book where Amano did the art work as well as written the story. And honestly I don't think Amano is going to be a great novelist, but the combinations of the two is what made this an amazing piece of art.

Something to go back to many times, admire and discover details in the artwork and ponder over the story.

I am looking forward to its release so I get my own hard-copy of this!
A must have for lover of illustrations and fans of Amano!!


ARC was provided by the publisher via NetGalley in return for a honest review. Thank you!