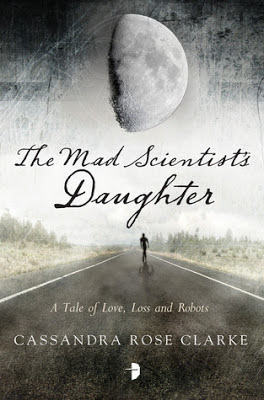 Summary:
The Mad Scientist’s Daughter is the heartbreaking story of the journey from childhood to adulthood, with an intriguing science fictional twist.

There’s never been anyone - or anything - quite like Finn.
He looks, and acts human, though he has no desire to be. He was programmed to assist his owners, and performs his duties to perfection. A billion-dollar construct, his primary task is to tutor Cat.
When the government grants rights to the ever-increasing robot population, however, Finn struggles to find his place in the world.

Review:
First of all the story has very little to do with the blurb. It's really misleading actually. I expected the story of Finn... But while he was in the story it was Cat's Story.
While it is set in a near future, with Robots, Androids the weather gone wayward I would not classify this as a sci-fi, but as a Romance Novel. (well ok we should go with sci-fi romance)

Its the story of Cat. Beginning when she is a small child. Spanning over several decades of her life. It's slow and winds up its way through them bit by bit.

The prose is the best part of this book. I always insist if I don't like the writing style I don't care for the story or the characters, but if I love it allot can be wrong with the novel and I will still like it.
This is such a case. After finishing the book I wasn't sure what I felt. The prose is melancholic and BEAUTIFUL. Clarke paints pictures with her words.

The character building was good. There were many characters that never touched me. And though I liked Cat and felt sorry for her- for more than half of the book I kinda was left cold.
She seems so shut off most of the time- one could have thought she was the Android.
She tries so hard to act unselfishly but she ends up hurting other by acting selfish and unthoughtful.
The entire story is told from Cat's POV. So I feel that all the characters were painted by her opinion. I do think that Clarke did this by purpose.

In fact I think this book was well thought through. The reason I did give it 3.5Stars is not the craft it is probably total personal preference. I expect action, sci-fi some romance... more my kind of book.
I got romance and many thoughts instead.
Truthfully this novel is much more than just a romance. It addresses the questions of what is love? compassion? desire? but more interestingly it also raises the question of what is humanity? what is consciousnesses?
That's the reason I rounded it up from 3.5Stars to 4. After reflecting on the story I found more and more things I liked, thought about those questions.

I think that this book will stay with me for a while!
A beautiful very unusual love story.


RC was provided by the publisher via NetGalley in return for a honest review. Thank you!