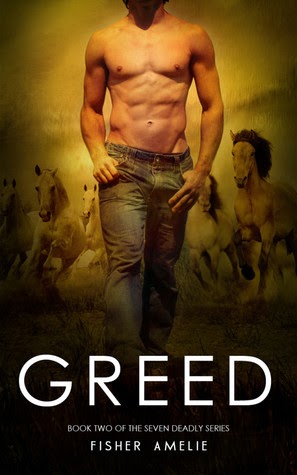 Summary:
Gather ‘round, love, because I want you. I want what you have, I want what you don’t have, I want more of what I already have. I want. But if you so much as ask for something in return, go ahead and walk away. Know if you want to play in my world, it’s every man for themselves and the weak become mine. Leeches will be obliterated because I make it my job to destroy them. I protect what’s mine and I take what’s yours…because that’s what I do. I want.

My story will not endear me to you and, frankly, I could care less if it does because I’m in this for the money and nothing else. There’s nothing redeeming about me. I’m a corrupt, money hungry, immoral asshole from Los Angeles. I’m every man’s worst nightmare and every girl’s fantasy.

For the third time this week, I find myself unsure of how to rate a book. Sadly Greed isn't a 4,5Star book and I am pondering if I should round up or down like the other two were.

Now you probably think, well she was not sure about Vain as well. And you would be right.
Then you would probably think, so why read Greed. Well, I had to- might not be the answer you looking for? But it's true. Just let me say this while we at it, I will be reading Fury as well.
I know. Trust me, I KNOW! Because here I am frustrated. Because how do you write a review about a book that kinda annoyed you for first 40%, then at 60% you felt a bit bored, at 80% you still didn't kinda know why you were reading it ( I told myself it was the BotW, that's why) AND then at 86% Fisher throws twists at you, and you can't breath. Maybe, you suddenly notice with dismay, you might like the MC? Then it all unravels and comes together. And at 95% you grumble to yourself, cause it's to happy clappy for your taste. The epilogue, though it's sweet, kinda makes you crinch, because let's face it we all know I am kinda jaded and that shit is just to much for my hardass heart to bear (but shh do not tell, I still am kinda glad it was put there). You feel it was a tad to preachy at the end as well... And to round it all off you puzzled as to how to rate it.
So how do you write a review? But more importantly how do you rate a book like that?
(since apparently I just ramble on, boring the crap out of everyone and call it a review, the first question answered itself)
Then there is the question why would I read the third book of the series.
Well, let's take a look at Greed shall we?

This is well written. For writing style Fisher would get 4 Stars from me. She is a good storyteller that, for the second time around, managed to captivate me, despite my reservations.
I love the idea of the series. Enjoyed the settings of them.

But my issues are more plot related and character related.
See though the MC goes through a great change and growth, I really didn't like Spencer much. I liked him in Vain, but loathed him in Greed for most of the book. I mean, I got his heartache, (except for the instalove bit- which kinda annoys me as always) because as I said Fisher writes superbly. I felt his pain, his devastation, his revulsion. Totally got that. I couldn't stand his whining at the beginning and all his excuses. And last but not least I really was annoyed about
him pursuing Cricket.
Cricket, though supposedly oh so amazing. Was annoying the hell out of me. Can you say spineless? Make a freakn choice girl and stick with it, damnit!
Bridge was sweet- but I don't feel like I actually got to know her, same about Jonah
And the grandparents? Can you say the Waltons?
If you take a step back and look at all the characters, they all a bit cliche and stereotype - again. But I think that didn't bug me as much this time around as it did last time.

My issue this time is the story line.
I mean nothing really happens in the first third, then Spence is busy trying to win Cricket, which I should mention pissed me off, he had no place pursuing her. Then it's the first twist. I wasn't really surprised about that, second twist is saw coming from a mile. Third twist, DUDE! WTH! I nearly gave me a heart attack! (and miss jaded over here would have loved that solution as an ending btw) the forth and fifth twist had me yawning. It was like, ugh we gonna just drag the inevitable ending out for a couple of chapters more, ok? And yes, of course I gobbled it up along with the epilogue. Because damnation! Did I mention Fisher can write?

So I here I am, wondering how to rate something, that annoyed, frustrated, bored and yet, captivated, entertained and moved me (too all kinds of emotions). AND I am planning to read the next novel and not just because of the cover. Did you see the cover? Damn! *fans herself* Yes I can be a cover slut and trust me I am not sad at all that Greed and Fury have these really really nice to look at covers. No, no, I wanna know what happens to Ethan. Oh and I should mention, I don't like him, AT ALL. Yep, you guessed it, I am blaming it on Fisher's writing!

My verdict? Well I think, it's a good book I guess...sooo a generous 3Stars -because Fisher knows how to write!