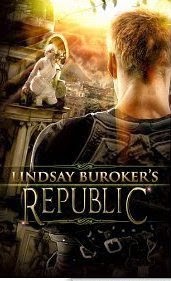 After the notorious outlaws Amaranthe and Sicarius helped overthrow the corrupt faction controlling the empire and brought in a great war hero to lead the nation to prosperity, they finally earned their pardons--and some time off. A tropical vacation cruising around in a private submarine? Perfect. But their trip is interrupted by a summons from the new president: they're needed back at home. Trouble unlike anything they've ever dealt with threatens to destroy the capital city and throw the fledgling republic into chaos.

The follow-up to The Emperor's Edge series, Republic takes place a few months after the events of Forged in Blood I & II. It is a complete 210,000-word novel.

I fell in love all over again with this series. If I ever thought that I was satisfied with 7 books on Amaranthe-Sicarius and the group, I was soo wrong. I can never get enough of them. There were a lot of POVs in this one and granted that Buroker wanted to focus more on other team members, I felt a little..impatient with the focus shifting from one character to another at least twice a chapter. Other than that, no complaints at all. I missed Books' grumbling and Akstyr's sneering but all in all, there were too many things happening to mind their absence. Maldynado was as hilarious as ever and watching him and Basilard teasing each other made me want to hug them so tight! Amaranthe and Sicarius were perfect. I'm not sure how I feel about the addition of a kid in Sespian's life but I'm happy for him. We get to see more of Rias and Tikaya and I'm really tempted to read the Encrypted series now.

To wrap it up, this book didn't disappoint and now I'm in a Sicarius-Amaranthe haze. Again.