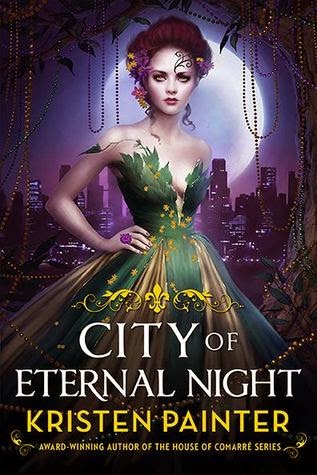 Magic and mystery collide in this second installment of the new urban fantasy series by House of Comarre author Kristen Painter.

Still coming to terms with their unexpected partnership, Augustine and Harlow have a tentative truce. With Harlow slowly working to accept being fae, Augustine still learning how to be Guardian, and feelings growing on both sides though, they do not have an easy road ahead.

But when a young girl is stolen from the Mardi Gras Exemplar Ball -- the biggest far event of the year -- Harlow and Augustine must put all their issues aside to bring her home alive. Harlow's father, Braziano, is of course their number one suspect, but evil lurks in every corner of the city and time is running out. Their only choices: Either find a way to rescue the girl, or Augustine must die.

So this took... a week? to read.
Yeah, I know.. There are several reasons for that. First and foremost, RL getting in the way. But also and sadly it took me a while to get into this.
It started really slow. Nothing wrong with that either. I just wasn't in the mood for slow and intense.
And mentioning intense...If I would have one word to describe this, that would be it.
I think Painter is a master with intense actually. The slow build up of Augies and Harlow's relationship, the dramas and disasters slowly sprinkled through the plot, the incredible descriptions, the world building, the action, the feels... it all is immensely intense. This is not a light anything.

Painters prose is beautiful and she has my heart wrapped around her pen. She is one of the most skilful urban fantasy authors I've ever read.

The world building is amazing. I loved it in City of the Rising Sun, I haven't read House of Comarré , her first series set in the same world, so all of it was new to me. In this instalment Painter added more details and managed to astound me again. I've never been in NOLA but after reading this... I wanna go, really really wanna go. Need to see exactly how Painter took the exciting place, it's feel and character and added her own brand to it. I wanna know exactly how much, how precise.. I wanna see the place that inspired this world.

The story line as I said is at time a bit slow. A slow but steady buildup till the end. There is not as much action as in the first book- I think I kinda missed that- but there is plenty of twists and turns. Some of them, had me totally sidetracked and others I saw coming and was dreading. I kept on oscillating between hoping that it would work out and waiting for the shoe to drop...right till the last word. Which by the way had me wanting to throw my kindle on the wall. I mean I gotta wait till what? APRIL?!! So frustrating! really really frustrating. And if you wondering. It's a cliffy alright. I mean it's not but yeah it is. See still oscillating!

The best part though by far? The character building. It is meticulous. Not a single flat or one-sided character. Each one is interesting, there are several POV, in fact quite a lot of them, but because Painter writes in third person and does an astounding job at it, it adds to the character building. The exact time a POV is chosen, the way they were written- they all unique to the different characters, not once was I confused or lost- all add to the character building. This is not a small cast. There are several new additions in this book, several new kind of fae and magic creatures. Painter managed to bring them across masterfully, I feel like I know them all, some of them I am hoping to get to know better.
Augie and Harlow being the two MCs, one gets to know them best. And I like them, bot , with faults and all. Both of them change and evolve throughout the two books, but stay uniquely themselves at the same time. And their relationship? Slow burn... no insta..Which makes me a happy girl. I did at times wish they would finally get it on. But then again, there is a realness to it, their friendship being deepened and their respect for each other grows slowly. Theirs is a companionship with a promise of more way more. So I can wait.

I was left with so many questions. So so so many. And to be honest I was not really satisfied with the answers that City of Eternal Night gave me. In fact, not much was resolved. A couple of deaths.. that's about it.
There are so many stories woven together, so many still to be told, I can't wait to see how Painter unravels them!

So. April. *takes a deep breath* I guess I could always start reading House of Comarré so long...