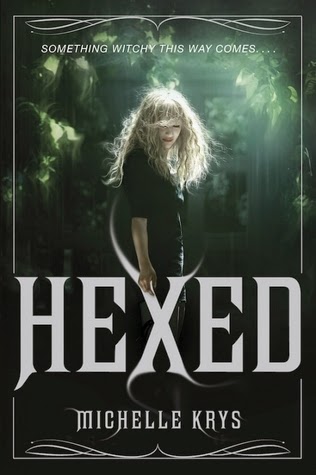 If high school is all about social status, Indigo Blackwood has it made. Sure, her quirky mom owns an occult shop, and a nerd just won’t stop trying to be her friend, but Indie is a popular cheerleader with a football-star boyfriend and a social circle powerful enough to ruin everyone at school. Who wouldn’t want to be her?

Then a guy dies right before her eyes. And the dusty old family Bible her mom is freakishly possessive of is stolen. But it’s when a frustratingly sexy stranger named Bishop enters Indie’s world that she learns her destiny involves a lot more than pom-poms and parties. If she doesn’t get the Bible back, every witch on the planet will die. And that’s seriously bad news for Indie, because according to Bishop, she’s a witch too.

Suddenly forced into a centuries-old war between witches and sorcerers, Indie’s about to uncover the many dark truths about her life—and a future unlike any she ever imagined on top of the cheer pyramid.

There was something missing....
Let me think about this.

Oh yeah. I got it

There was no slow clap.
Otherwise Krys managed to add every single cliche a teen movie would sport. AND I mean every single one.

Oh trust me it's all there.
Now I do enjoy the occasional craptastic book. At some point I thought this might be possibly a craptastic little read. But nope. Not even that.
It's just C.L.I.C.H.E. in capitol letters.

Ok there are a couple of good things.
First did you see the cover? I mean is so very very pweeeety. And that's probably one of the reasons I did pick this book. I will not even deny it. I am a cover slut. And the cover... well it's ....convincing... know what I mean.*smirks*

Krys writing style is actually pretty neat. I think she can write. But sadly that's where the good ends.  Everything else was more or less a disaster.

The plot is more or less a string of teen movie cliches lined up - a supposed gasph worthy little twist at the end, leaving the story with  a huge cliff-hanger. *yawns*
Problem about the cliffhanger: I could simply not be bothered but mostly I was so not surprised. AT ALL.
And that goes for every supposed twist and turn in the book. It's beyond predictable.

The world building is ... well there isn't much world building done actually. On one level when you read the blurb you get the feeling there is a good idea behind this. And maybe there is, but frankly it doesn't even feel like much of an idea. It's kind of a Twilight with witches really, or any  high-school teen movie with extra gore and magic... same old.
Not only is the world building unimaginative. But Krys did extreme minimal world building. We know little at best. It's set in L. A. and there is a war between witches and sorcerers .. end of world building.

The characters were so cliche. I found them irritating at best. I could not connect with any of them. When tragedy struck, I could not careless. Indi is shallow and spoilt at best. And the supposed change of heart she has, didn't not really change that fact actually.
I mean there is a villain who did remind me of a wanna be reservoir dog- and he actually mentions that he is trying to be just that. I was seriously irritated by that time.
The other villain's ugliness was described  a gazillion time. I felt like; Ok I got it, he is an ugly scary guy!
Bishop - supposedly mysterious bady with a dirty mouth came across just as a plain asshat. Jezebel- seriously?!

The banter between them was I am sure supposed to be funny.. but ...

"I don't get it, but whatever. I guess he's a butt guy" I cross my arms over my small chest. "Am not,"Bishop says. "I like boobs as much as butts""


Funny? Uhm cliche more likely.
Look basically I think this should have been made into a teen movie. Forget about the book. or books. It would work really well as a film. You know those kitschy teen high-school film, everybody has seen, but know-one will admit? Yeah this is it, but in book form. Except I doubt that it will be fun or cute even with a hot cast.
It still has the potential to be a craptastic series I guess..
Will I read the next book? You kidding?!