Twelve Dates of Christmas: The Ballad of Lula Jo 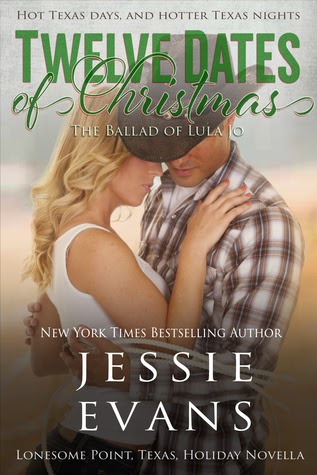 THE TWELVE DATES OF CHRISTMAS: The Ballad of Lula Jo
A Lonesome Point Novella

It’s the time of year for miracles…

Once upon a time, Lula and Carter were inseparable and Christmas was Lula’s favorite time of the year. But when Lula refused Carter’s proposal one dark December night—unwilling to abandon her hometown to live the dangerous life of a treasure hunter’s wife—the holiday lights went out in her heart. She abandoned all hope of romance and embraced a hermit’s existence, keeping her distance from dangerous men and untamed cowboys. Until now…

Years of hard knocks have taught Carter that the greatest adventure is the one he once found in Lula’s arms. He’s back in Lonesome Point determined to win back the only woman he’s ever loved, but Lula is just as determined to keep her heart under lock and key. She gives Carter twelve days—and twelve dates—to make his case before she sends him on his way, not counting on the fact that the two of them have grown into people even more meant to be.

It looks like Lula and Carter are on track to Happily Ever After take two, but when Lula’s old fears are reawakened Christmas Eve it will take a holiday miracle to keep them together.

Sooo I had this great idea to read some Holiday novellas... I have a soft spot for winter lurv and having met le DH on 12/24 ... well, ok, I admit it I am a christmas romance sucker!
This however- OH DEAR! where to begin?

Well first the dialogues were way to corny. I mean who talks like this?


"I have a feeling you might get lucky." " I'm already lucky"

All the supposed cute banter was just too put on, it felt unreal. In fat it sounded like a corny rom-com. You know, the kind of movies you wonder who they were made for, cause they are so way out there so over the top when it comes to romance, surely no-one buys into that?

The writing style is in fact the only redeeming thing about this novella. Evans did some beautiful descriptions, I enjoyed her prose.

The story lines was. Well. Not much to tell about. It's your starcrossed lovers come second chances kinda thing. It's predictable and nothing new. I didn't mind the predictability by the way. It is a Christmas novella after all, I was after a cute and fluffy fix.
The end, well, uhm. The gnomes thing, really? I don't know how I feel about that. But I do know that I didn't really care any more because I was by that time so annoyed with the characters, I seriously could not care less.

The characters were all steriotypical AT BEST. They were dizzy idiots. I mean seriously?!
Mia seems kinda fluffy and small brained, Carter is mr. desperation deluxe, every one was weird and just unreal. I don't know if maybe Evans was trying to go for quirky? Sadly quirky it ain't not. Add the corny dialogues to their weird stuck up charaters and you got- certainly not cute and fluffy- more like irritating as hell.
I should have probably stopped at the prologue. Because I was already agitated by that. I mean really?! WTH? Have they never heard of a compromise?????

BUT crown for the most annoying thing in the novella goes to *drum roll* Lula.
So first she is being beyond unreasonable. I mean, she was not 15 she was 22. Then well
she behaves like a stuck up, judgmental, old spinster:

Her cousin had more enthusiasm than sense, but Lula didn't try to reason with Mia anymore. Some people were a lost cause, and all you could do was include them in your prayers before you went to sleep.

But then she totally reverts into a teenager:

Lula wrenched the door open and slammed inside, flipping the lock behind her and ignoring Carter's call for her to come back. She pounders up the stairs to her apartment, tears streaming down her cheeks.

Let's just leave it at this. I can not believe I wasted my precious reading time on this.