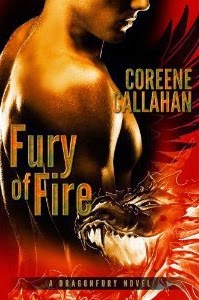 
A clandestine race of half-dragon, half-humans known as dragon-shifters lives among us.

Bastian, leader of the Nightfury dragon clan, is sworn to protect humankind at all costs. For him, honor and duty always come first. When the clan dictates he take a human mate to sire a son, he falters, aware that for a human to birth a dragon-shifter she must die. Myst, the woman given into his care, is the most extraordinary he's ever met, and though he can't bear the thought of harming her, he is bound by duty.

Myst loves her life in the human world, but Bastian has captured her heart in an instant of electric connection. But Bastian and his warriors are in the middle of a deadly battle with the Razorback dragon-shifters, intent on killing every Nightfury clan member—and the humans they protect—the fate of their world and ours hangs in the balance.

An extraordinary blend of action, fantasy, and steamy romance, Fury of Fire brings to life a dangerous new world intertwined with the survival of humanity, all while exploring the meaning of honor and the nature of true love.


Quite frankly I think I am more forgiving when it comes to rating an audiobook, than when I rate a book I've read.
I think there are two reasons for this:

1. I listen to audios while I do other stuff... anything really from studio work to doing house chores and even playing games. And I often listen to audios that are more fluff.
2. The narrator take total preference over the writing style. So if an audio is well narrated, the story entertaining enough... well, most of the time I am a happy camper

Btw I noticed this, when one of my GR friends was reading a book, I had done as an audio- i rated it 3,5Stars and rounded it up- she kept on quoting from the book, as she read it, and I was beyond surprised that none of this actually phased me, while I was listening to the audio. Which is why I shall in future be a wee bit more cautious when rating audios and Fury of Fire being the first audio I listened to after this revelations- well it's getting the brant of it I guess

The world building of this is actually really interesting. I am not that big of a shifter PNR fan, but I really liked the idea behind this. Not having read that many shifter books, I might be mistaken, but at least from where I am standing, this has many fresh ideas thrown in. I love the mix of magic and modern science with a good dose of PNR.

The plot is quite fast paced. Lots of action, the battle kind and the smutty kind, and quite entertaining, even when it was rather predictable.

The narrations is really well done. In fact, I think, I might have not much enjoyed reading this one. But listening to Darcie's deep rumbling voice was rather pleasant. He did a really good job, though I had to giggle a little at Myst's voice... still the entire story was way better told in his voice than in mine.

The two biggest issues I got with this one are the character building and the multiple POV. Low and behold it isn't the insta-L's! I actually didn't mind them AT ALL. Which, well you know, is beyond surprising, it's my pet hive after all! Kudos for that one to both the author and the narrator. I think it's a sign of a job well done

The multiple POV was just too many. I am usually someone who doesn't mind several POVs, but I felt it was just too much in this one. In fact I am not quite sure why the author decided to go that way, but I found it at times more disrupting than anything else. Plus on more than one occasion it gave away too much of the story, ruined any suspense that could have been there.

The character building was on one level really well done. I liked Myst's and Bastian's way of dealing with their relation ship- it felt real, and we talking insta everything here! In fact I think Bastian's character building was the best in the book. Myst was a bit of both, total cliche and really interesting strong female. I think the females are rather well written, actually. But the villains? JUST NO! It reminded me of a cartoon. It was just too much too over the top.
Most of the characters were actually rather melodramatic. But I kinda shrugged that off, I couldn't do the same to the fact that they all were way to much like a walking cliche. Like the cop, the best friends, the nurse, the butler.... if you look at them from that point of view each character totally fills in for the usual cast.

I think lovers of the genre will enjoy this one.
And I am probably going to listened to the next book in the series.

Did I mention I loved Darcie's voice? *goes to Audible to see what other audios he narrated*

So this is somewhere between ok and good for me