If you haven't read the book, we suggest you get yourself a copy and go read it.... What we can say is: We loved it!
And one of the things we agreed upon- we would like to get a Luke book, or at least his side of the story ( though we still want to have a Luke book anyway)

Kendra kindly interviewed Luke for us:

Luke’s Side of the Story

KH: Howdy peeps! Today, Luke Madison, the older of the Madison brothers, snowboarding legend, and alleged King of Snowmass, is here to talk to us about his Christmas vacation…and a little matter of his younger brother’s pursuit of Zoey Miller.
Luke:  Alleged King of Snowmass? I am the king.
KH: Ahem, who placed first in the in the Slopestyle contest?
Luke: I always knew you were on Parker’s side.
KH:  Sorry. I understand you want to tell your part of the story. Did you really bet your brother you could win Zoey’s heart before Parker? Even though you knew he loved her?
Luke: Honestly? I wasn’t really sure if it was some kind of crush, or if it was the real deal. Maybe he’d built it up in his head. If it was real, I wanted him to work for it, see if she was really what he wanted. Besides, I had a pretty clear signal she was into me.
KH: So, were you into her?
Luke: :: shrug ::
KH:  Come on, now.
Luke: Yeah. I think I was. Maybe some. But, look, I’m not lonely for company, and my brother wanted it more, so…
KH: Are you sure you aren’t a little brokenhearted here?
Luke:  :: Sly smile :: Why? You want to fix me up with someone?
KH:  You’re a mess. You know, all this deflection makes me think that there are some things you’re avoiding.
Luke:  :: Looks away ::  Maybe. It’s just…Zoey said something that kind of stuck, that made me think maybe I should give things a try with her, but I didn’t figure it out in time.
KH: What was that?
Luke: That I can’t seem to stay with a girl for more than a few weeks. That I get bored. And…she’s kind of right. I don’t mind having fun, hanging out, but maybe I haven’t met the right girl yet, the one who will stick. So I let Zoey go.
KH: Sorry, man, but I’m pretty sure you told her about the bet to piss her off because you were hurt. That’s letting her go?
Luke: I’m not proud of that.  I don’t like to lose, and I got too emotionally invested. Truth was…I wanted her with my brother. So I pushed. I just didn’t expect it to, um, hurt when it worked.
KH:  Do you think if the right girl comes along, you could settle down?
Luke: Yeah, at some point. It would take a pretty strong girl to handle me, though.
KH: Are you ever not so…confident?
Luke: You meant to say cocky, didn’t you? :: quick grin ::
KH: Busted.
Luke: I knew it. I am pretty cocky, but I’m good at the things I do. If there’s a girl out there for me who’s a match for that, then bring it on.
KH: I hope you find her, then.
Luke: Me, too. Because that would be a lot of fun. 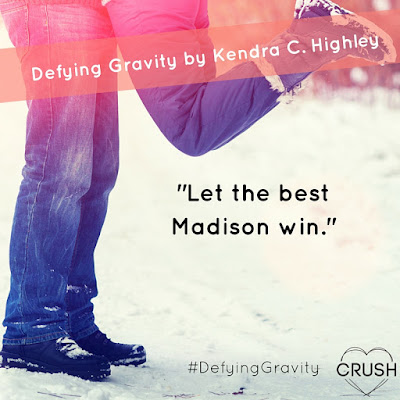 Thank you Kendra! And let's hope we hear more of you Luke!

Excerpt:
The crowd at the entrance started doing strange things. For one, it parted like the sea before Moses. For another, guys stopped dead in their tracks…and those who didn’t stop ran into walls or tripped over their own feet. The women and girls around these guys started rolling their eyes, some good-natured, some not so much.
Parker’s heart hammered like a drunk carpenter had taken over his pulse.
Zoey was on the mountain.
She breezed through the crowd in a lime-green ski suit, her snowboard resting against her shoulder. Blond hair streamed out behind her under the hot pink knit cap she’d been wearing since they were kids, and her cheeks were flushed with the cold. Her smile could stop traffic…no, really, it had stopped traffic. The sudden loss of coordination among the men near the entrance was proof.
He could only imagine what her real smile—the one she only gave him—could do.
Wait. No. He didn’t want her smiling at any other guys that way.
She searched the crowd, oblivious as always to the way people stared, and Parker waved. Laughing, she barreled straight at him, tossing her snowboard to the side, before knocking him into a snow drift. They landed in a clatter of boots, boards, and limbs, with her on top.
Her grin lit up the world. “Parker Madison! How the hell are you?”
His entire body went supernova hot. He could feel every inch of her, despite the layers of ski clothes separating them.  Jesus. He choked back a groan and tried to think of anything other than how perfectly they fit together. If she felt how his body responded to her…
No, not happening.
He sighed heavily and brushed melting snow from her cheek. “How am I? Well, Miller, I’m bored.” Lie. So much lying. Whole mountains of lie.
“Bored?” She blinked at him. “I’m not that late.”
He pretended to scowl at her, enjoying the close-up look at her baby-blues. Huh, was she wearing mascara? Since when did she wear makeup on the mountain? Not that he was complaining—she looked amazing. “Zoey, two ages of the universe passed by while I’ve been waiting for you. Maybe even three.”
“Is that so?” She smiled again and tugged on his cap. “I missed you.”
There’s the smile he’d been waiting for. His mouth went dry and he had to swallow a few times before he could speak. Maybe he should just kiss her instead. “Yeah?”
“Yeah.” 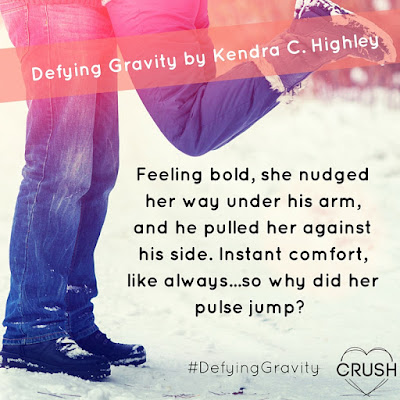 If you're a fan of contemporary YA romance novels in general and either the best friends to lovers or the brothers fighting over the same girl tropes, then you'll love Defying Gravity by Kendra C. Highley! And of course, if you've already read Finding Perfect, the first book in the Finding Perfect series, then you'll definitely not want to miss this one. Even though Zoey's story can be read as a standalone without any problem, you'll already know her, her BFF Paige, and Paige's boyfriend, Ben, if you read and loved Finding Perfect, which will make this book even more enjoyable!

Please return to this site each day to celebrate the release of this book and follow along with the blog tour from July 25-Aug. 5, 2016:

Does Defying Gravity sound like your kind of book? Find out more now: 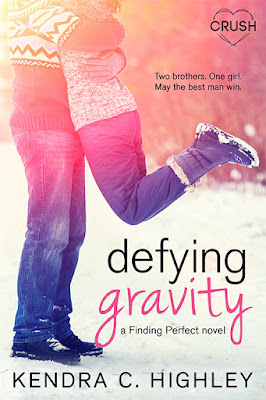 Disclaimer: This book contains enough sexual tension to melt snow, the hottest near-kiss in the history of near-kisses, and a sexy snowboarder determined to win the heart of the girl he loves.


Want to Read More? Get your copy of Defying Gravity (Finding Perfect, #2) Today!