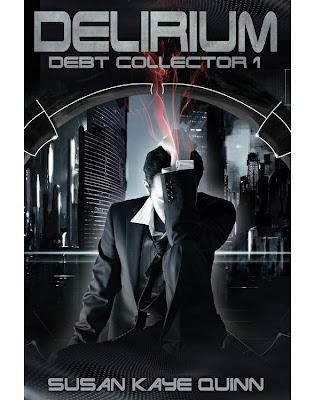 Lirium plays the part of the grim reaper well, with his dark trenchcoat, jackboots, and the black marks on his soul that every debt collector carries. He’s just in it for his cut, the ten percent of the life energy he collects before he transfers it on to the high potentials, the people who will make the world a better place with their brains, their work, and their lives. That hit of life energy, a bottle of vodka, and a visit from one of Madam Anastazja’s sex workers keep him alive, stable, and mostly sane… until he collects again. But when his recovery ritual is disrupted by a sex worker who isn’t what she seems, he has to choose between doing an illegal hit for a girl whose story has more holes than his soul or facing the bottle alone—a dark pit he’s not sure he’ll be able to climb out of again.

Delirium is approximately 12,000 words or 48 pages, and is one of nine episodes in the first season of The Debt Collector serial. This dark and gritty future-noir is about a world where your life-worth is tabulated on the open market and going into debt risks a lot more than your credit rating. For more about the Debt Collector serial

The reasons I ended up requesting this serial on Netgalley are two:
First the blurb sounded interesting, obviously.
Second because I kinda liked the idea of the serials. For many reasons actually. On a sentimental side, it reminded me of Duma. The fact that most of his work was published as serials, kinda makes this form of publishing endearing to me. Then I like reading novellas, a quick fix between books. But mostly I thought this could go two way; either this is going to be totally bad or really good. Curiosity got the better of me.
Well, Delirium is the latter.

It's a a quick read. I actually had to wait for something, so it filled my time. - exactly what I like about novellas. Though it is really short, Quinn managed to outline an entire new world and the main character.

The plot is fast paced, but despite that and its length, it doesn't feel rushed. And though the story obviously just started, I like where it ended. No massive cliffhanger which will make waiting for future episode bearable. And most importantly it left me wanting more!

The story is narrated by Delirium. A dept collector at the age of 20. Though he seems much more mature in some ways. While obviously there isn't loads to know about him just yet and there are only outlines set, I still connected with him. Quinn opened a window into the character, that gives one a glimpse, just enough that it makes you care but not too much so it feels overly pushed. You left with an idea of who Delirium is, what drives him and the hint that there is more to him than all that as well.

The world building is intriguing, I like the idea of the dept collectors and human worth, the life force etc. Again, Quinn somehow got the balance just right, again. There is enough world building over the few pages to outline it, but not too much to way it down or feel tried.

I really like Quinn's writing. It's simply beautiful and I am sure I will be reading more of her works in the future.


All in all an intriguing, fast paced and well written serial!
A warning: This will leave you wanting more!!

Review copy was provided by Publishers through Netgalley in exchange for an honest review. Thank you!

View all my reviews here