ARC Review: The Girl with the Iron Touch by Kady Cross 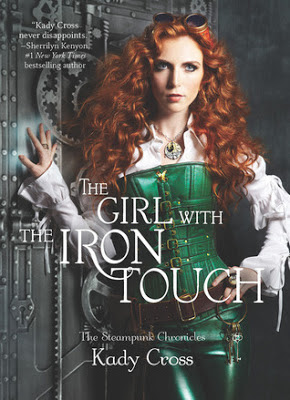 The Girl with the Iron Touch by Kady Cross

When mechanical genius Emily is kidnapped by rogue automatons, Finley Jayne and her fellow misfits fear the worst. What's left of their archenemy, The Machinist, hungers to be resurrected, and Emily must transplant his consciousness into one of his automatons—or forfeit her friends' lives.

With Griffin being mysteriously tormented by the Aether, the young duke's sanity is close to the breaking point. Seeking help, Finley turns to Jack Dandy, but trusting the master criminal is as dangerous as controlling her dark side. When Jack kisses her, Finley must finally confront her true feelings for him...and for Griffin.

Meanwhile, Sam is searching everywhere for Emily, from Whitechapel's desolate alleyways to Mayfair's elegant mansions. He would walk into hell for her, but the choice she must make will test them more than they could imagine.

To save those she cares about, Emily must confront The Machinist's ultimate creation—an automaton more human than machine. And if she's to have any chance at triumphing, she must summon a strength even she doesn't know she has....

This is a piece of Steampunk heaven right there!
I love this series, and Cross definitely delivered beyond my expectations. The world-building is again deliciously mechanical and slightly Goth, just like I like it. It was fun to return to the much liked characters and watch them evolve and grow. Exciting to battle old evil nemesis. And this is definitely the most romantic one of them all.

The storyline is in somewhat similar keeping as the previous books. There is a mystery going on, and one of the crew gets into trouble- this time it's Emily. The crew sets out to rescue her. What sticks out in compare to the previous books, the romantic entanglement between different parties have become more intense, a thing I wholeheartedly approve of. So it's all there, the technical inventive Steampunk, mystery, action and romance.  This is really well paced, loads of stuff is happening but it doesn't feel rushed. Cross spends just enough time on the emotional part and on the action scenes, so one can relate to the characters but still get a kick-ass read out of it.


The character building is probably the best of the entire series. Revisiting the crew of misfits felt like revisiting old friends. But in this book, we got to explore their insecurities and how the try to come to with their abilities and past actions. Throw in there the wonderful sense of humor Cross displayed in the previous book with great dialogues and you get great characters, that seriously grow on you and make you laugh as well.

"What do you have in mind?"he asked, Oh, she had a list. But he was talking about rescuing Emily, so she put her mind to that instead.

It was girly of her. Vain, too, but while she'd die for Sam, she would not go bald for him unless she absolutely had to.

"Yes, you should have know. After all, you're omnipotent." He shot her a narrow glance in the light of their torches. "You know, sarcasm can be a very unattractive trait.""So can being a martyr."

And we have a return of the Mechanist, he is even creeper than before. Jack Dandy also makes a return after an absence in The Girl With The Clockwork Collar. I am totally on team Jack- and was rather pleased he made a return. Even more interestingly we've been given more insight into his past. Again Cross slowly shows more sides to this character, which makes him not only more endearing but also more interesting and mysterious.

The world building of these series has been phenomenal. It's straight classic Steampunk and I love all the gadgets Cross comes up with. Being a geek girl, i savor those passages! Cross uses several modern inventions and add her own Victorian twist to it. Which makes them rather believable actually, very clever indeed.

A question that has stuck with me though; What has happened to Jasper during his absence? Will we hear about that in the next book? I really wanna know!
I guess there isn't much i can do to find out- except wait. For an unannounced time period! There hasn't been a release date set for the next novel in the series.
The good new however? The Dark Discovery of Jack Dandy is set to be released on July 1, 2013. A must read for all Jack fans, it's set before the Girl with the Iron Touch.  And yep, I shall be reading it as well, already pre-ordered it!