ARC Review: A Soul For Vengeance by Crista McHugh 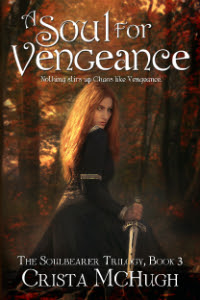 A Soul For Vengeance by Crista McHugh

When Prince Kell returns to Ranello, he finds his homeland in ashes. The invaders from Thallus destroyed everything he held dear, leaving him heir to a throne he can’t claim. The thirst for vengeance consumes him and drives him right into the arms of the most unlikely of rebel leaders.

Zara has fought for months to keep the hopes of the Ranellian people alive. Finding Kell is just the thing their dying rebellion needs. But as she tries to soothe Kell’s bitterness and turn him into the leader he’s meant to be, she finds herself desiring the one man she believes she’ll never have. A man whose heart was broken by a yellow-haired witch named Arden Soulbearer

I really like this series. So I was rather excited to get the ARC for this. I just wanna make a comment on the covers though...
So this was the cover of the first book when it was first published

which is in accordance the covers designed for the following two books.

The reason I mentioning this? I really liked the first version.
The reason I picked up a copy of  A Soul for Trouble? Yep, the cover. Then I read the blurb, it sounded interesting- the rest is history as they say. To be honest I probably wouldn't have picked up the second design. YES, I know how very cover-slut of me! I'm just stating the honest truth. I don't know why the decision was made to change the design. But personally I think it was the wrong one.

Soul of Vengeance has aspects that I really enjoyed and aspects that were not so good in my opinion. Sadly while I enjoyed the book, it's my least favorite in the series. So I gave it 3.5 Stars and rounded it up.

The storyline in the third book felt a bit like a mash-up of the first two. Which is a good thing, I love Epic Fantasy. Except that I found the fantasy bits not quite epic enough. I love the idea of the Soulbearer, the world building had been already really well set up in the first two. So I expected more of this one. But frankly it felt more like a paranormal romance this time around. I would have loved for McHugh to somehow delve deeper into the epic fantasy genre than she did this time around. Instead of that McHugh concentrated a bit too much on the romance part for my taste. While it was fun and cute, its a pity because at the end of the book I felt that it was to cutesy. I  felt like it didn't live up to it's potential. I know that partly this was to rap-up things, but actually I felt like things were neglected and rushed in favor of a romantic happy ending.

I enjoyed Arden's time in Lothmore Palace. It was interesting to get to hear the Gravarian Lore and also see a different side Loku. Since the three MCs were rather well established in the first two book, it was interesting to see Arden develop a relationship with her father and learn more about her own magical abilities. Though I found her really childish at times and was a bit bored of her running away  shenanigans.
Loku this time around was actually a bit disappointing and his sudden change in character rather unpleasant. While he was rather mischievous in the first two books, he still seemed to care about Arden. Their relationship was really interesting, I loved their dialogues in the previous books. In this much not so. In fact he was downright horrid and she just kept on shutting him up. I think the whole Soulbearer thing actually came a bit to short in this book.
Still many questions were unanswered for me. Was Loku just playing her that whole time? For what means? He did say that Arden was different from the previous Soulbearers and had special abilities - but it was never explained.  Honestly thinking back this is one of the biggest let downs of the book.
Dev's POV featured the least, which is a pity, since I totally always was on team Dev.  His turn around was never really explained either.
Zara was an interesting new addition. She is a completely different character from Arden and definitely a great addition. Except there was the same doubts that Arden had and her run-away syndrome. Which felt a bit used, since Arden done it x-amount of times over all three books.
Kel probably was the most interesting change and most developed character. It was interesting to see him grow from the ever fancy dandy to a leader and someone with depth. I do have to say, I found the transmission from player to romancer a bit hard to believe. I would have preferred he would have kept some of his player side he had in the first book.

This book seems more about Zara and Kel than about the Soulbearer and her story. And while allot of world building was done in the first two books, I still would have loved to see more in this one. I feel I know barely anything about the Thallians even though there was a battle involving them.
I think I would have been fine with the world building as is, if it would have been more of a character driven story this time. Which it wasn't. The character building wasn't strong enough for that either. In fact the book was mostly romance driven.

I really enjoy the way the series were written and I like the characters, found the world building interesting and most of all love the Soulbearer idea.  After finishing this book, I actually wondered if there will be another one. Because many questions were left open. In fact it felt more like a spin-off novel to the Soulbearer series.  And the ending? While I have to admit, I did have a goofy grin on my face, when I read it. Then my reaction was; hang on? That's it? It was way to cute and fluffy for me and it left me with a feeling that things were unfinished.

A good series, but it could have been great.  Sadly the last book is my least favorite.  Great ideas and good writing mean I'll definitely will look out for the next book McHugh writes.