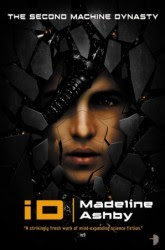 Javier is a self-replicating humanoid on a journey of redemption.

Javier's quest takes him from Amy's island, where his actions have devastating consequences for his friend, toward Mecha where he will find either salvation... or death.

Just like in vN the first book of the series Ashby wowed me with her world-building. I love the concept of 3D printers that can print food, clothes ect but also the concept of reproducing Androids.
While vN was Amy's story, iD is Javiers. It's written from his point of view. And there are many back-flashes of his life before he met Amy. The story picks up exactly where vN stopped. While I think it's preferable to have read the first book, this could even work as a standalone. The only connection actually being that this is set after previous story.

The plot is often fast paced, there is action, violence, sex and some really good geek humor as well.
I think the pacing was better in this one than in the first one. I love how different this feels in compare to the first book, but it still is totally connected to it. There were several twists in the story that I really didn't anticipate. Ashby managed to keep me on my toes through the entire book.


This is Javiers book, as far as I'm concerned. I really liked him in the first book, having seen him through Amy's Eyes. Seeing the world through his eyes was interesting and very different. Amy's POV in vN was obviously way more naive and childish, with her being so young and inexperienced. Javier's view is much darker. I really enjoyed getting to slowly know his past and understanding why he did certain things. The amazing thing though was how little I cared for the humans! Ashby had me totally siding with the vN. I think this has to do with two factors: I could easily connect with Javier, his short-comings and weaknesses but also that Ashy wrote such good human villains. The humans that these vN interact with were all terribly broken and flawed. Ashby writes them amazingly, just write, not to much so they would become cartoonish, but rather very human and in some ways likeable, which makes them even creepier. I think the character building is way better in this book than in the first, which is the main reason why I rated it higher than the first book.

The world-building is once more ore inspiring. Ashby created a weird and enticing world in vN and she didn't miss a beat in iD as well. I kinda expected unique after reading vN, but Ashby managed to vow me over and over again, definitely exceeded way beyond my expectations.

The writing is really good. I enjoyed Ashby's beautiful descriptions as much as the well written action scenes. The best part of her writing in my opinion is her humor and her cool geek references.

The interesting thing about the series is, that the first book left me mind-blown by the world building and with the question how much vN were like humans. iD left me with way more philosophical questions, questions of humanity, justice and choices.