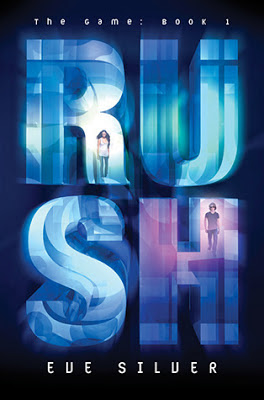 So what’s the game now? This, or the life I used to know?

When Miki Jones is pulled from her life, pulled through time and space into some kind of game—her carefully controlled life spirals into chaos. In the game, she and a team of other teens are sent on missions to eliminate the Drau, terrifying and beautiful alien creatures. There are no practice runs, no training, and no way out. Miki has only the guidance of secretive but maddeningly attractive team leader Jackson Tate, who says the game isn’t really a game, that what Miki and her new teammates do now determines their survival, and the survival of every other person on this planet. She laughs. He doesn’t. And then the game takes a deadly and terrifying turn.

In theory I should have liked this book, interesting set up, lots of action and kick-ass heroine. It sounded like my kind of book. But I found myself bored while reading this. I am not quite sure what the reason is for it's failure to deliver, but mostly I think its in execution.

For starters for some reason I wasn't a big fan of the prose. (which is a total downer for me) It just wasn't my preference. It wasn't terrible mind you, just didn't do it for me.

Right from the beginning you get thrown into a rush of action. And for the most part I have to say, the actions scenes are neat. I enjoyed them probably most of the entire book. But for lengths I was lost, in a weird world, not sure what's actually happening and then there were extremely boring stretches of info dump. The pacing is fast during the action scenes there is rush and excitement and then it kinda died down for some world building- or rather world explaining. In my opinion its a one of the biggest flaws of the books actually.
The fact that we left in the dark, wasn't such a big issue for me. But the fact that the explanations, when the finally came, where full of flaws was hugely annoying. Add to that insta-love and a weird love triangle. And the entire story line was mediocre for me at best. Oh and the cliffy? UGH! Cliche of cliche ending for a fantasy series.

The characterbuilding is rather mediocre as well. Jackson was supposed to be enigmatic, I guess. But for me he just ended up going on my nerves with his smart-ass answers.
Luca arrived with a bang and then just fizzled out.
Carly was just an epic horrid self-involved witch.
I think I should mention, that I am not a fan of the girl falling for the douche bag thing. Because really why would one go for an ass? Dont misunderstand me I like a bad boy, but not a douche, not someone who's just being an ass. Why go there?? But once more that was the way it went in a YA. So the entire weird love-triangle was way more annoying than usual.
Miki was the best developed character and mostly I could relate to her and liked her. But her choices with people, were really annoying! seriously? I am not sure why Silver went with these. I found that the support characters were cliched and actually didn't help with the character-development or add any kind of value to the book, actually they really annoyed me.

The worldbuidling should have been amazing. But it wasn't. The setup is interesting, the idea is great but in the whole it underdeveloped and has wholes. Add to that the disastrous fact that most of it is done through long stretches of info dump and is totally unrealistic. I found myself being bored and rolling my eyes on many occasions.

Will I be reading the next book in the series? I don't think so.

ARC was provided by Publishers through Edelweiss in exchange for an honest review.