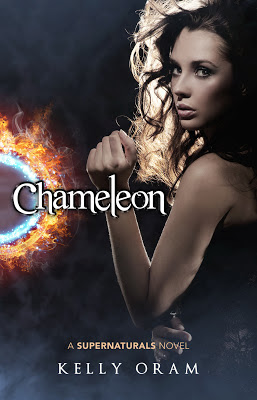 Publisher:Bluefields
Series: Supernaturals #1
Release Date: June 25, 2013
Summary:
For small-town rebel Dani Webber magic and monsters are no more real than the Easter Bunny… until the day she accidentally stops time. Dani quickly discovers that not only do supernaturals exist, but she herself is one of them. This is great news for her life-long best friend Russ, who can finally come clean about his own supernatural status and his undying love for her. Before the two can start to enjoy the long overdue relationship, Dani is taken by a powerful council of supernaturals who believe she is the Chosen One destined to save them from extinction.

As if being kidnapped and expected to save the world isn’t bad enough, an ancient prophecy warns of the Chosen One’s dark nature: “Only the truest love will keep her an agent for good.” The council believes they know who this “true love” is and, unfortunately, that person isn’t Russ. The mysterious, powerful and devastatingly handsome Seer is the last person Dani wants in her life, but when she starts having visions of a horrific future, she has no one else to turn to for help.

Soon Dani finds herself torn between two very different boys with two very different opinions of whom she can trust. With the visions getting worse and time running out, Dani is forced to put aside her feelings and work with both the Seer and Russ before an ancient evil is unleashed upon the earth.

Review:
I got to admit I was a wee bit weary when I started this novel. Because in the first chapter there was a douche-bag guy and a smart-ass girl.. so very Oram actually! I was reminded of Being Jamie Baker - and was worried this might be very similar. Well besides the snarky rebellious impertius teens that are in the book this has not that much in common with BJB. I got to admit that I've been wondering what kind of a teen Oram was. Anything near those very entertaining to read but probably totally infuriating characters of hers? I for sure have no right to jude, because quite frankly my mother had stated that around 15/16 the sweet little girl that used to reside in my room was replaced with some monster.I for one certainly get angry, irreverent, insubordinate types.

The story line was interesting, in fact this book was a page turner for me. Despite my issues with love triangles. And this love triangle was weird to say the least. And I found some characters annoying as well. But it didn't bother me actually, I just devoured the book. It's quite a long book with its 400pages, but I basically read it in one setting. The fact that there were several possible culprits and that there was so much happening and unraveling, kept me going. To be honest I did guess who the villain was quite early on, but not without swaying a good few times. Which I think it one of the great things about this novel. The mystery part.
The down side very little of the mystery was revealed and I was left with loads of questions and lots of the threads are unfinished as such.
The romance parts were, well, odd. I think quite a few people might be surprised. I found the explanation to it, interesting. The love triangle annoying. But there were also really beautiful moments and while most of it was kinda out there, the moments when Oram got it right ended up over ruling those.

The entire book is written from Dani's POV, except for the Prologue that is. So it's easy to connect to Dani. While at first she was kinda annoying and angry and irreverent. She does grow, she does after loads of wavering choose a stand.
Russ and Gabriel couldn't be more different from each other, and yes, I know I said it, but I totally dreaded the whole love triangle. But I did enjoy the moments between Dani and Gabriel. While Russ was too brash, too arrogant and just a douche half the time. Gabriel was too goody goody. I found his prim and proper language after a couple of hundred pages really annoying, the fact that he was so super naive was quite unbelievable. I like the bad boys, normally at least. But I am team Gabe, despite it all. Because Russ, while I smirked at the banter between him and Dani for quite a bit of it, was just a jackass half the time. And I found him totally immature.
My biggest critic about most of the characters is that they were all rather polarized, and not exactly rounded.


The world building is clever. It's contemporary, set in the world we all know and then Oram threw in a huge lot. Mythology, Joan of Arc , wizards, seers, oracles, fey, necromancers, vampires, werewolves, demons, angels of death… you name it - it's in there. Look it's not extraordinary or some great new inventions. But with all the known elements she also added a few twists, that made it interesting enough. Though the gaps are far from filled.

This is actually my favorite of Oram's books so far. And I think it is an interesting and engaging start to a new series. I am hoping we will be able to read the sequel very soon!