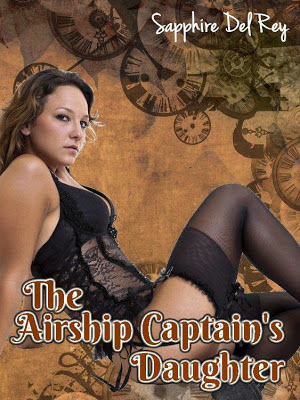 
Once a daughter of privilege, Moira Drake now lives and works at the Somerfield Blimp Port with her adoptive father, Captain Teague, running an air ferry service for the wealthy class of English society. It's not a bad life, precisely, but Moira yearns for more. She craves action and adventure. She also, unsurprisingly, craves sex, as she's still a virgin, even at her advanced age. However, she also knows that to invite one of the local men into her bed is a dangerous proposition, as once they discover her secret, they'll want to marry her, ending her dreams of freedom forever.
Captain Zac Relfi, a member of the American Air Command, has orders to "deflower" Moira before the Queen and members of The Old Peerage use Moira and her precious virginity to retain control over a steam-powered populace growing tired of the old ways. Using force at first, Zac soon discovers that the need for adventure that lives in Moira is more than enough to match his own. And when her legs are wrapped around his waist, he finds that all he wants is more of her hot, slick, naked body beneath his.
All people depicted in this work of fiction, which features adult sexual acts, are over 18 years of age.

I love Steampunk and I thought a little fun hot Steampunk would just be the right thing to read today, I expected M.Brooks kinda steamy airship fun. Instead I got basically just a sex scene. Set in Steampunk Victorian times- the world building bits and pieces were the best part of the novella btw. BUT the sex scene? First the woman got basically raped, then forced to oral and after that got some unwanted butt sex. REALLY?! So let's say we think some women like it rough, NO still means FREAKN NO!!!
But on top of that to add insult to injury the language is horrifying. The choice words that Del Rey has for vagina are just simply disgusting.
So not what I bargained for when I started this.
Definitely one of the worst things I ever read!