Review: The Golem and the Jinni by Helene Wecker 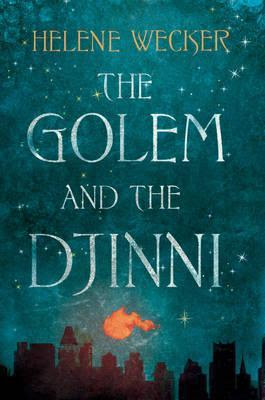 The Golem and the Jinni by Helene Wecker

Chava is a golem, a creature made of clay, brought to life by a disgraced rabbi who dabbles in dark Kabbalistic magic. When her master, the husband who commissioned her, dies at sea on the voyage from Poland, she is unmoored and adrift as the ship arrives in New York in 1899.
Ahmad is a djinni, a being of fire, born in the ancient Syrian desert. Trapped in an old copper flask by a Bedouin wizard centuries ago, he is released accidentally by a tinsmith in a Lower Manhattan shop. Though he is no longer imprisoned, Ahmad is not entirely free – an unbreakable band of iron binds him to the physical world.
The Golem & The Djinni is their magical, unforgettable story; unlikely friends whose tenuous attachment challenges their opposing natures – until the night a terrifying incident drives them back into their separate worlds. But a powerful threat will soon bring Chava and Ahmad together again, challenging their existence and forcing them to make a fateful choice.

Review:
How do you express your thoughts for a book that keeps you awake at nights, leaves you thinking about it all day long, gets you so tangled up in its story that you start dedicating songs to it inside your head and even after weeks of finishing it, leaves you speechless with its magical beauty?
Well, I’m starting to think that you can’t, ‘cause I’ve been staring at the blank screen for minutes now, wondering where and how to start.

The Golem and the Jinni is the kind of book that you will want to own and caress and coo words of adoration to, which would seem creepy and insane to anyone watching but fellow readers would agree with me earnestly!

This is not just a fairy tale, not just a romantic novel with paranormal creatures, but a book that makes you wonder what it is to be free, human and alive. A book that is so rich and vivid in picturing a landscape full of different cultures, of creatures made of fire and built of earth, of living in a world full of boundaries, of figuring out your strengths, of recognizing your desires, of sacrifice, of joy in finding someone who understands, of sorrow, of friendship, of humanity, of expectations, of kindness, of disappointment, of death but also of hope and love and magic. This is the book you want to read next.

The story is set in the 19th century and starts with one desperate, unsuccessful Otto Rotfeld going to a nefarious Kabalist well known for fulfilling people’s desires for a price. He asks the codger to make him a Golem, not for his protection but to be his wife. Schaalman, the unscrupulous Kabalist, finds the request odd but builds the Golem according to Rotfeld’s demands. Rotfeld then sets off to New York with his bride in a casket and the note to bring her to life (or destroy her) in his pocket. However, his dream to start a new life in the land of dreams has a tragic and sudden end when his appendix raptures; but not before he wakes up his bride and leaves her alone, master less.

While the Golem is left to fend for herself in a ship full of people whose wishes are like a vise, driving her insane with the need to fulfill them and trying not to draw attention to herself, a tinsmith named Arbeely in the city gets a flask to repair; a flask which turns out to be holding a jinni captive in it for centuries. The jinni finds himself disoriented, bound in human shape by an iron cuff at Arbeely’s shop with no account of how long he had been in there and by who.

And so begins the tale of two unnatural, mythical creatures in a foreign land with no idea of what to do with themselves.

As the story unfolds, the two of them, each with the help of a generous human, slowly build a life for themselves. The jinni finds himself restless and anxious, being bound when he was used to being as free as the wind. Well, he actually was the wind in his true form. He does wonders with his hands and metal, and builds quite a reputation for his work, but that doesn’t calm him much and his wandering mind and fretful days make him take long late night walks.
The Golem, on the other hand, cannot afford to be as reckless as the Jinni. With the help of a Rabbi who found her on her first day in the city, she learns to ignore everyone’s thoughts and slowly grows confident enough to step out in public without going mad. She finds herself exhausted every day by trying to keep her true identity hidden from everyone and is fidgety during the nights with nothing to do. She couldn’t walk the streets like the Jinni for the fear of being noticed and bothered; until one eventful night, when finally their paths cross.

As a reader, the journey is slow, not the soporific kind making you pull your hair out slow, but the leisurely paced kinda slow, where you experience everything with the characters in the story and love every second of it. Wecker takes her time in getting us acquainted with every character in her story, each of whom is important in weaving together the threads of this majestic tale into a remarkable and unforgettable tapestry, while effortlessly juggling with the present and the flashbacks into the time when the jinni was free, gradually leading to fill in the gaps about how he became a fraction of what he was and revealing the identity of the magician behind it. She leaves us readers in a dilemma, making us want to turn over to the next page as fast as humanly possible while trying to make us hold back and devour each and every word. You’ll find yourself desperately waiting for the moment the Golem and the Jinni finally meet; you’ll wonder how that ice cream vendor would have anything to contribute to the big scheme of things; you’ll get curious about that silent kid who hangs around with the Jinni more than anyone else; you’ll want to know about what happened to the Jinni’s frivolous lover; you’ll look forward to the Golem and the Jinni’s late night encounters; you’ll be grabbing the edge of your seat as the evil guy in the story finally catches up to your two all-time favorite characters.

Pheewww.. Like, seriously dude, what else could you ask for?

If you’ve made it this far in my loooong discursive review, I gotta tell you, read this book. Read it not for the ending, not for the final showdown (‘cause honestly? I felt it was a wee bit rushed), not for the romance or the plot (although the plot is fantastic too), but for the pithy prose and the mesmerizing writing style with MC’s to die for. If I haven’t been successful in convincing you, go read other reviews and make up your mind! Okay? Just… read it. Please? Okay? Okay..