Review: The Companions by R. A. Salvatore 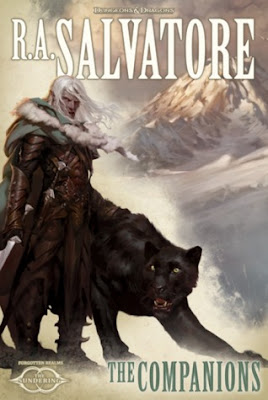 The Companions by R.A. Salvatore

Publisher: Wizards of the Coast
Series: The Sundering #1Pages: 386 Pages
Genre: Fantasy
Release Date: August 6, 2013
Summary:
This latest installment in New York Times best-selling author R.A. Salvatore's beloved fantasy saga, The Companions moves Salvatore's signature hero Drizzt into a new era of the Forgotten Realms. As Drizzt's fate hangs in the balance, he reflects on the lives of the trusted allies who stood by his side throughout his early life--the friends now known as the Companions of the Hall. Meanwhile, the first stirrings of the Sundering begin

Having heard lots about Salvatore and never read any of his work, I jumped at the opportunity to read this when I was asked through Netgalley to review The Companions.
I like the idea of the concept that The Sundering was written by different authors, putting together a series with different view points seems a really clever idea.
I never read any of the Forgotten Real novels, and to be honest I found it really hard to get into it. I felt often lost, had to re-read passages and that resulted in me finding this a rather tedious read.
It's your classic fantasy alright, but at the end it's to geeky even for miss geek-girl over here. I think it might have more appeal to the male audience. But that's me purely guestimating, since I don't know anyone who read this as well.

I found the characters interesting enough, but somehow felt their lives were rather unexciting. And other than them being friends, there seemed little connection. I didn't really connect to any of them. I never really understood the whole rebirth thing, especially the reasons for going that path but to be fair, I'm not quite sure if this  is because I haven't read any of the other books.
The world building was interesting, but again I felt lost at times. I think it's way better if you actually have read the other 20odd books of Salavtore, as a standalone, it isn't that convincing
The writing style is probably my favorite thing. It's your wonderful classic epic fantasy and I can see why so many people love Salavtore's books.


The entire book felt like a set-up book. While one doesn't have to read the previous books, I feel that it would add much to experience of this book. Because as a standalone it didn't really work for me.
Will I read the next book in the series? Probably not.
This is a book for people who have read at least some of the previous books and enjoyed them.