Review: Lawless & The Devile of Euston Square by William Sutton 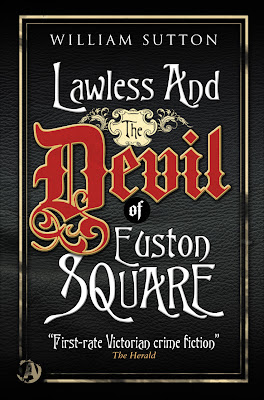 Lawless & The Devile of Euston Square by William Sutton

London 1859-62. A time of great exhibitions, foreign conquests and underground trains. But the era of Victorian marvels is also the time of the Great Stink. With cholera and depravity never far from the headlines, it’s not only the sewers that smell bad.
Novice detective, Campbell Lawless, stumbles onto the trail of Berwick Skelton, an elusive revolutionary, seemingly determined to bring London to its knees through a series of devilish acts of terrorism.

But cast into a lethal, intoxicating world of music hall hoofers, industrial sabotage and royal scandal, will Lawless survive long enough to capture this underworld nemesis, before he unleashes his final vengeance on a society he wants wiped from the face of the Earth?

Lawless & The Devil of Euston Square is the first of a series of historical thrillers by William Sutton set during the mid-nineteenth century, featuring Metropolitan policeman, Campbell Lawless, aka the Watchman, on his rise through the ranks and his initiation as a spy.

Before Holmes, there was Lawless…

Before Campbell Lawless, the London streets weren’t safe to walk…

I very very rarely don't finish a book
But after 4tries I still couldn't get into it!

So this will be a really short review.
The biggest issue for me was definitely the writing style. It's just really not to my liking. But on top of that the whole thing was extremely long wound and had so many details added it became rather complicated to keep the storyline in mind.
I do get what the author was trying to do. The fact that he tried to recreate that world and tried to portrait the society at that time. But somehow it got lost in too much and it felt like he was trying to hard.
Still there are aspects I did like, the whole entrepreneurial view of London at that point. The fact that the world was vastly changing thanks to visionary inventor and investors.
I was looking forward to something in the lines of Sherlock Holmes. I love novels written in that era. But this was nothing like a Holmes story and I felt I was drowned by too much world building.

I am not rating this, since I never got past the halfway mark. I found the different slangs impossible to understand. which made this beyond difficult to read. Add to that, the slow plot and that I didn't like the writing style. And this  was mission impossible for me