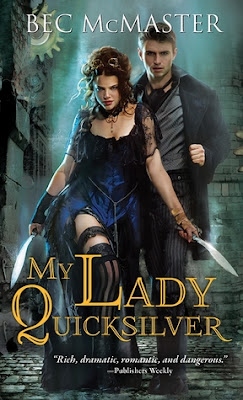 My Lady Quicksilver by Bec McMaster

Publisher: Sourcebooks Casablanca
Series: London Steampunk #3
Pages: 416 Pages
Genre: PNR, Steampunk
Release Date: October 1, 2013
Summary:
Determined to destroy the Echelon she despises, Rosalind Fairchild is on seemingly easy mission. Get in. Uncover the secrets of her brother's disappearance. And get out.

In order to infiltrate the Nighthawks and find their leader, Sir Jasper Lynch, Rosalind will pose as their secretary. But she doesn't count on Lynch being such a dangerously charismatic man, challenging her at every turn, forcing her to re-evaluate everything she knows about the enemy.

WOW!! I feel like I've been wrought through an emotional roller coaster... and I loved it. *gasph!* yes, i did- as shocking as it is, i usually don't deal well with that many emotions. Or maybe its just the mushy kind I don't like?
Well. I like this. Despite my gut being destroyed and my heart beating way faster than usual - and lets not talk about the twists and knots I felt throughout this. REALLY! I don't know why I like this. Well I guess because of all of the above?

The world building was quite minimal actually. This is the third book of the series. But can just as well be read as a standalone. This is steampunk yes, but just barely- not many cool gadgets or even much machinery. This book is purely action and character driven. Thought the world building was not awe inspiring it also wasn't bad. I could describe you the place the story is set and its social structure. While there was nothing exciting  tech wise, the social structures are actually quite interesting- and closely linked to the plot and characters- one even got all the historical facts fill by the end of the book.  The world building just  totally took the background, and honestly who cares? I for one was busy having my heart and gut wrenched through twists and turns and couldn't care less about cool gadget right now.

The plot was action filled and the was some good smut peppered all over the book. But honestly its in the end all about Rosa and Lynch and their story. So if you boil it down to the gist it's your PNR plot as usual on many level. But again, who cares?  When the story told had me totally invested for the characters?

And I think that's where the strength of this book lies. The character building. Each one was carefully build up. The main characters and the support cast. Slowly one gets to know more and more about them. And at the end, I cared what happened to Jack or Ingrid and Garrett and Co.
The book is written from Lynch and Rosa's POV.
While both of them seem totally ruthless in the pursuit of their goals, slowly one gets to know them. See different aspects about them, their insecurity and I really really loved them both. Seriously I adore Lynch- and identified with Rosa to a scary degree (not that I am a liar, a thief or an assassin)

Which brings me to the writing style. McMaster knows how to pace and slowly unwrapped thing, all in the middle of loads of action and delectable smut.
She somehow has found a formula that got straight to my secret hidden core and I think that's a huge part due to great writing. I am definitely going to read whatever she writes next!

A great read for PNR lovers, if you looking for hardcore steampunk- this isn't for you.
But be warned! This will leave you feeling like your heart has been twisted, wrenched through a press, thrown at the wall and in the end caressed and deftly put back into place... and even worse you might discover you liked that just like I did.