ARC Review: My Date from Hell by Tellulah Darling 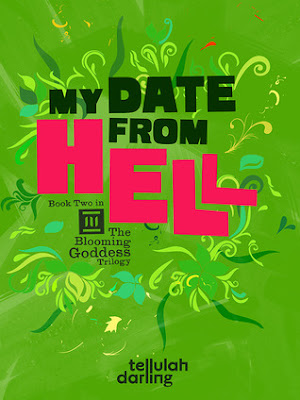 My Date from Hell by Tellulah Darling

Publisher: Te Da Media
Series: The Blooming Goddess Trilogy #2
Pages: Pages (Hardcover)
Genre: YA, Mythology
Release Date: October 31, 2013
Summary:
Sophie Bloom’s junior year has been a bit of a train wreck. After the world’s greatest kiss re-awakened Sophie’s true identity as Persephone (Goddess of Spring and Savior of Humanity), she fought her dragon-lady guidance counselor to the death, navigated mean girl Bethany’s bitchy troublemaking, and dealt with the betrayal of her backstabbing ex, Kai (sexy Prince of Darkness). You’d think a girl could catch a break.

With Zeus stepping things up, it’s vital that Sophie retrieve Persephone’s memories and discover the location of the ritual to stop Zeus and Hades. So when Aphrodite strikes a deal that can unlock Sophie’s pre-mortal past, what choice does the teen goddess have but to accept?

The mission: stop media mogul Hermes from turning Bethany into a global mega-celebrity. The catch? Aphrodite partners Sophie and Kai to work together … and treat this suicide mission as a date. Which could work out for Sophie’s plan to force Kai to admit his feelings for her–if she doesn’t kill him first.

Add to that the fact that BFF Theo’s love life and other BFF Hannah’s actual life are in Sophie’s hands, and suddenly being a teenager—even a godlike one—seems a bit like … well, hell. Whatever happened to dinner and a movie?

The YA romantic comedy/Greek mythology fireworks continue to fly in My Date From Hell. Love meets comedy with a whole lot of sass in book two of this teen fantasy romance series. Breaking up is easy; dating is deadly
Rating:

Just when I was convinced that 2013 is cursed with the second book syndrome, Darling managed to not only produce a good second novel. NO! She did better! Because I liked My Date from Hell quite a bit more than My Ex from Hell. I found myself snickering over witty banter and being totally absorbed in the story. In fact in my Date from Hell I got what I missed in the last installment of the series- the cheeky and gritty humor I loved so much in Darlings Debut Sam Cruz's Infallible Guide to Getting Girls. It Darlings best asset in my opinion, it's what sets her apart from most other YA writers.

Just like with Sam Cruz Darling managed to somehow get it right- cute but not too cutsey, sexy, some gritty and lots of humor. So why only 3,5 Stars rather than 4? Because The Blooming Goddess Series is too melodramatic for my taste. Does that mean I was exasperated with the rather annoying Sophie? Hell yeah! But I like her more this time around the last time. She is growing on me, no matter how melodramatic and self-pitting she is at times, Darling has done a better job this time with the character building. I found myself understanding Sophie's dramas way more and routing more and more for her.
I am so team Kai- let's not even go there! While reading, I kept on thinking see! I knew he is cool!
Is the support cast still cliche? Hell yeah! Probably even more so than in the last book.

Just like in the last book the story line is a roller coaster of emotions and full of action. Maybe even more than the first book. This installment is non-stop - there is always something happening. Which made this a page turner for me. I started and found myself unable to put it down, needing to know what will happen next, despite it being really predictable.
I expected the cliffy at the end. But it still made me wanna email Tellulah and ask her how she thinks I will survive another year? And yes, I am waiting for the next installment (in case you read this Tellulah; I am happy to read a chapter at the time,  as you write them ;))

I liked the world building in the last book. The idea of taking well know myth, mixing them in, adding new things and making it your own just somehow does it for me. And Darling does a great job at it. I love how the Gods are kinda similar but still so different and the descriptions of the places they end up are really well done. It's my favorite part right after the humor.

Telullah's prose is straight forward, tongue in cheek and no frilly bits. It works incredibly well for her story line and humor.  As you know I wouldn't bother looking at a third book if I wouldn't like it, having been invited to take part in her Sassy Girl Swoony God Tourney (THANK YOU! it was so much fun!) I was given a small window to meet to Darling as a person, and to be honest I kinda feel that it works so well, because its authentic to her personality.

My biggest critique to this: a bit too predictable and some of it is not only too melodramatic but also too cliche.


A fun and exciting second book (FINALLY a good one!!! after so many disappointments this year!) which left me wanting more!