ARC Review: The Damsel and the Daggerman by D. S. Dawson 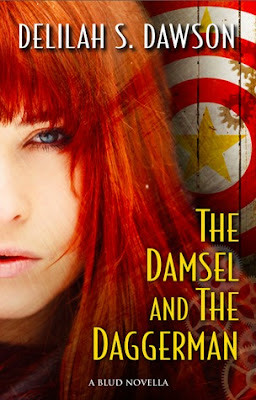 The Damsel and the Daggerman by Delilah S. Dawson

Publisher: Pocket Star
Series: Blud #2.5
Pages: 100 p
Genre: Steampunk
Release Date: January 14, 2014
Summary:
In this “carniepunk” e-novella from the author of Wicked As They Come, a knife-thrower meets a lady journalist determined to uncover his dark and dangerous past.

Bad boy knife-thrower Marco Taresque is the hottest and most dangerous performer in the caravan. He keeps to himself until a pesky female journalist arrives, anxious to interview him about his checkered past—his last assistant disappeared under mysterious and bloody circumstances, earning him the nickname “The Deadly Daggerman.”

Unsinkable journalist and adventurer Jacinda Harville doesn’t take no for an answer, and she’s determined to wear down Marco no matter how threatening—or incredibly desirable—he might appear. He agrees to an interview—but only if she’ll let him strap her to a spinning table and throw knives at her body. How can she say no? And how can she resist him when he leans close for a kiss that strikes her more sharply than any blade? It’s the first time she’s let a man get the better of her, and she’s determined it will be the last…

Just when she thinks she can’t take any more of his games, Jacinda receives a note from Marco saying he’s finally ready to tell her the truth about what happened to his missing assistant. She sets out for an address miles away, but what she finds there turns the tables on everything she thought she knew about the tender lover who wears a smile as sharp as his knives.

As secrets are unraveled and passions take hold, Ginger realizes her hard heart has melted. But will it be too late to save Marco—and herself—from the daggerman’s dangerous pas

LOVE!LOVE!LOVE!
That was my first reaction upon finishing this. That and the warm giddy feeling that spread across my being, materialising itself in a silly happy grin.. and "oh no! wait! it's finished" a slightly panicked run to the laptop and check on amazon. To be disappointed with the knowledge that well, the next book in this series "Wicked after Midnight"will only be published at the end of January 2014.  le sigh!

Well the good news is- The Damsel and the Daggerman is going to be published beginning of January- thus sweetening the waiting time a bit. The novella has all the things we have come to expect from Dawson. Great world building, interesting characters and good smut as well.

The story is set in Criminy's Caravan and is a romantic mystery. The plot is interesting and enticing  with a big showdown moment and several twists- some of them totally unexpected.  Despite being relatively short it didn't feel rushed - except maybe at the end the big showdown bit, was kinda sudden and fast.

The world building oh the world building! - well as you know I adore this series. One of the reasons is the world building.  And Dawson didn't slack this time around. She built on the previous books but in such a way that this could be easily read as a stand alone. Her Steampunk world is surprising, dark, dangerous, gritty, full of magic and paranormal beings but also beautiful, surprisingly Victorian, with great Steampunk gadgets and details and leans cleverly onto our real world.

The character building is really well done as well. Many of the characters we got to know in the previous book featured. But it is mainly about new Characters. Mainly Jacinda and Marco.
In this short story I got to know Jacinda- most of this is written in her POV- and connected with her. I understood what drives her and how she became who she was. Given that this is only 100pages long, this is a great feat.
Marco was totally enticing, mysterious and hot. And I might change from camp Criminy ;) Seriously though, he was a puzzle most of the times, he also felt real and interesting. (did i mention he is seriously hot?)
There was also an introduction to Demi, the main female character of Wicked after Midnight. One only got a glimpse of her, but I am the hook and I can't wait to read her story in Blud #3

Dawson's prose is again beautiful, captivating and enticing. She seriously can write steamy scenes like very few other authors I know. But she also captures my imaginations, paints a beautiful, dark and goth world with her words that seeps into my being in some way and stays with me like a wonderful vivid dream.

A great novella that could be easily read as a stand alone. A definite must read for lovers of the series and the genre.