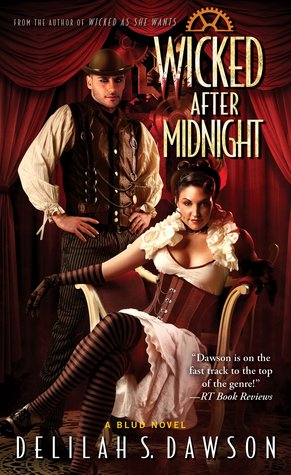 Life as a contortionist in Criminy’s Clockwork Caravan should be the height of exotic adventure, but for Demi Ward, it’s total dullsville. Until her best friend, Cherie, is stolen by slavers outside of Paris, and Demi is determined to find her.


On the run from his own past, Vale Hildebrand, a dashing rogue of a highwayman, hides Demi from the slavers…but why? He pledges to help her explore the glittering cabarets of Paris to find her friend, but much to Vale’s frustration, Demi soon attracts a host of wealthy admirers. The pleasures of music, blood, and absinthe could turn anyone’s head, and it would be all too easy to accept Cherie’s disappearance as inevitable—but with Vale’s ferocious will and Demi’s drive to find her friend, they soon have a lead on a depraved society of Parisian notables with a taste for beautiful lost girls. Can Demi wind her way through the seedy underbelly of Paris and save her best friend before she, too, is lost?


I got a bit of a dilemma here....I've had huge issues rating this. I would honestly like to say, this is just absolutely fabulous and that I'm totally smitten. But well I am not.
Well, this is good. Don't misunderstand me. But it's NOT wow! I am totally smitten and this is fabulous like the previous two were. Two reasons:
I had huge expectations, because let's face it Dawson has never disappointed including this time;
and I really really didn't like Demi.
Because I loved the previous books and novellas so much, was smitten by each and every one of them. I ended up comparing Wicked after Midnight to all of them. And since I wasn't wowed by Wicked after Midnight as much as I was with Wicked as They Come or Wicked as She Wants, I ended up analyzing each detail and comparing story-lines, characters, world-building, writing-style to the t - even the smut got inspected and compared. So while I adored the storyline of Blud #1 and was smitten by Dawson's world-building and description in Blud #2 - Wicked after Midnight, well did't in either point wow me as much as the other two books.
One of the things I adore about the series is that each book is actually really different. Yes they all set in the same world, same kinda background, there is a connection to the MCs; but each novel is different, they set in different locations in the same world, the MCs in each book are really different and the story lines are quite different as well.
It's like they are a paintings in a series and each one of them holds a different color theme.
And the comparison to a painting, is not by chance. When I read her books, I feel like Dawson paints worlds for me with her words. While in the first, was a painting, done in dark colours, with a goth feel - it depicted a bond forming between two people - one that really moved me , the second was one of lots of whites, whimsical but cruelly beautiful -fairytalesque - still a touch of goth- a painting that enchanted me- the third was bright red, and greens and well ruffles and showgirls and while I admire it, it didn't do that much for me, other than me thinking oh this is nice. I expected a wee bit more Dumas... instead I got Mouline Rouge.
The thing is Paris Cabaret, not necessary my scene, Paris and I share a wary relationship. Cabaret and I - seem unable to comunicated what so ever. AND I really didn't like Demi
And there lays the gist of this. I expected to be blown away and Demi prevented that.
She was so spoilt and so selfish, self-centered and egotistical and top that with her at best teenage behavior - which by the way makes no sense, since had been in College in the US, and at the time of the book was TWENTY-Freakn- SEVEN. This was a serious draw back for more than half the book.
But thankfully Dawson's is great a character building -so I had Vale. Vale is so dumaesque, so mysterious, so handsome, so charming and so oh-la-la je suis french which makes me super hot. And he also is the only interesting character for first half of the book. Because there was just too much cattiness for my taste and too much well cabaret? Here we go again, the two of us, just not a good combo.
Even more thankfully Dawson does character growth. So during all the stuff the goes down- and a lot of stuff does go down- this is by no means a boring book- Demi does change, many of the female characters do as well and Vale just gets better and better- so that in the end, I could relate to them and actually did care for them, even Demi- who marred a perfectly pleasant experience with her stuck-up selfishness.
So you might have guessed the world building is not my favorite in the series- BUT this is the third book and there are three novellas as well and each and every time Dawson adds more awesome stuff to it. While I enjoyed the world building in the previous two more, this was just as innovative and fantastic as the other two. I do wonder how Dawson does come up with this stuff!

So back to my dilemma- I wanted this to be more than 3,5Stars because Dawson is one of my favorite fantasy writers and because this is a good book. But well for me it wasn't more.
And I am saying this with a heavy heart, because it is totally subjective. I did just enjoy the other two better- I can't say that this is not as good quality-wise...
Do I hope Dawson will write book 4 in the series? Absolutely
Will I read anything she publishes? Hell yes!
Would I recommend it to Steampunk lovers? Naturally, it's a must.
And still I have after long thinking and pondering decided - though I know lots of people might love this one better- to be absolutely honest.
See I am more of a dark colored goth or whimsical whites kinda of a girl than the bright ruffles.  So 3,5 Stars.

ARC was provided by Publishers in exchange for an honest review