Hello Rachel!
You just published The Black Dog. I was lucky enough to read the ARC.
So I am really happy to be able to ask you a few questions!
Thanks for inviting me to post at Closet Geeks, Deniz!  It’s a pleasure to be here.

You started writing as a hobby – what made you shift it to your profession.  What did you do before?  Any advice for aspiring writers?

Placing The City in the Lake and The Floating Islands with Random House in a two-book contract made me shift instantly from dilettante mode to professional.  I already had and still have a part-time position anyway, with a tutoring program associated with a local community college – in fact, as soon as I finish this interview, I really should go start on the statistical analysis and report for last semester’s tutoring.
Anyway, since I have a part-time job, I have plenty of time to write.  At least compared to people with full-time jobs and kids.  I don’t know how they do it!  That actually connects up to advice.  If you want to write, in my opinion a part-time job that is reasonably interesting is better than a career you’re passionate about.  But, though you might hope to retire and do nothing but write, you will probably want a real job, too.  Your income from writing is most likely going to vary wildly from year to year, so having a steady job that pays your basic bills is definitely a good idea.  Besides, your job can help stop you from turning into a hermit.  I suspect a half-hidden urge to be a hermit is present in a lot of writers.

Who are your favorite writers?  Who inspires your writing?  Are you an avid reader?  What did you read last?
At first I thought that was really the same question in two forms, but then I realized that actually I do have favorite writers who don’t directly influence my writing style.  CJ Cherryh, for example.  I love nearly all her novels and pounce on every new Foreigner book as it comes out, but I don’t like to read Cherryh’s books while I’m actually working on a project of my own.  Our styles are too different, and hers is very invasive (for me).  Or Steven Brust.  I definitely enjoy the “first-person smartass” style of the Jhereg series, but I couldn’t write like that to save my life.  The same goes double for Terry Pratchett.  I think Night Watch, for example, is a masterpiece, but Pratchett is writing social satire disguised as light fantasy, which is not something I could do at all.
On the other hand, I like to re-read Patricia McKillip just before I start a new project.  Or certain books by Sharon Shinn, especially the beautiful, dreamy – nightmarish, sometimes – Shapechanger’s Wife.  Or Robin McKinley.  There are a handful of other authors, too, who I hope do inspire my writing.  I’m always very pleased to be compared to one of them, as for example by All Things Urban Fantasy, which just said in their review, “Reminiscent of Robin McKinley’s SUNSHINE with a YA sensibility, BLACK DOG proves that in the hands of a master, every mythology has new adventures to offer.” That’s what I like to hear!

What makes a book a five-star book for you?
Interesting question!  When I’m using a ten-star system, I reserve ten stars for those few books which manage utter perfection; stories such as The Shapechanger’s Wife, say, or The Changeling Sea by Patricia McKillip.
But when I’m using a five-star system such as at Goodreads, then I will give five stars to any book I truly loved, even if I think it is not actually perfect.
For me, that usually means a book that draws me in, that engages me and makes me feel like the author’s world is real, or ought to be.  A book with great characterization, because I’m a character reader first.  A book with a great setting, with excellent worldbuilding, because that is very important to me.  Nothing grimdark, because that doesn’t appeal to me at all – but I would never rate such a book in the first place.  I’m not the right audience.
Faults that don’t bother me all that much include pacing issues or, for example, a somewhat predictable overall plot.  Not that I don’t appreciate a real surprise, such as Andrea Höst threw into And All the Stars.  But I wouldn’t necessarily rate a book down because it fails to surprise me, as long as the characters work for me and the setting is well drawn and the details along the way are truly charming or beautiful.

How do you go about writing a book?
I figure out the world and the characters by writing the first three chapters.  Then I beat the middle of the book and the basic plot out of the aether with a hammer.  Then I enjoy the downhill slide to the denouement, which is often one of my favorite part.
I usually write straight through from beginning to end, from two to ten pages a day depending on whether I have a fast-approaching deadline or not.  If I seriously stall out, usually it means I have taken a wrong turn and need to re-assess the plot.  The most I ever had to erase was two chapters – about forty pages – and in that case, I had to throw those chapters away twice before getting it write.
Sometimes I wish I were an outline writer, but I’m just not.

What inspired you to write BLACK DOG?  Is this a standalone?  Or will there be possibly a follow-up?
There will definitely be a sequel; it is all but finished now.  There will be shorter works in the same world, featuring the same characters, because I have a couple of those written.  There may well be further books in a series, especially because I have a chunk of a potential third book in my head, but that depends on factors such as sales of the first two books and what other projects I have lined up that are eating my time.

What can we expect from you next?
Next up could be the second book in the BLACK DOG world!  I expect you’ll be able to look for it about this time next year.  However, if I am sufficiently energetic, I may bring out a self-published novel later this year.

Thank you so much for your time and we are looking forward to many more books from you! 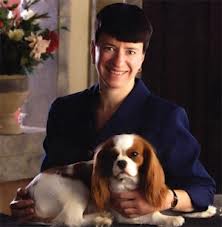 About the Author
Rachel Neumeier started writing fiction to relax when she was a graduate student and needed a hobby unrelated to her research. Prior to selling her first fantasy novel, she had published only a few articles in venues such as The American Journal of Botany. However, finding that her interests did not lie in research, Rachel left academia and began to let her hobbies take over her life instead.


She now raises and shows dogs, gardens, cooks, and occasionally finds time to read. She works part-time for a tutoring program, though she tutors far more students in Math and Chemistry than in English Composition.