(February 4, 2014; Forever E-Book; $3.99)
Sexy, gifted, and loyal, PI Jacob Decker is a tall, cool drink of perfection who had Emmanuelle Holmes at "hello." His relationship with Emme's best friend kept them apart for years, but things have changed. Now that a case has brought him to Gnaw Bone, Colorado, the road is wide open for Emme and Deck to explore something hotter and deeper than Emme dreamed possible. So why is she sabotaging the best thing that's ever happened to her?
It isn't easy to catch Deck off guard, but Emme does just that when she walks back into his life after nine long years. The curvy brunette had her charms back in the day, but now she's a bona fide knockout . . . and she wants to rekindle their friendship. Deck, however, wants more. Emme's always been the one; she excites Deck's body and mind like no other woman can. But a dark chapter from Emme's past overshadows their future together. Now only Deck can help her turn the page-if she'll let him . . . 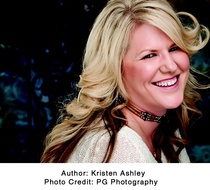 About the author:
Kristen Ashley grew up in Brownsburg, Indiana, and has lived in Denver, Colorado, and the West Country of England. Thus she has been blessed to have friends and family around the globe. Her posse is loopy (to say the least) but loopy is good when you want to write.

Kristen was raised in a house with a large and multigenerational family. They lived on a very small farm in a small town in the heartland, and Kristen grew up listening to the strains of Glenn Miller, The Everly Brothers, REO Speedwagon, and Whitesnake. Needless to say, growing up in a house full of music and love was a good way to grow up.  And as she keeps growing up, it keeps getting better.

“Sometimes,” Chace started, and his tone was cautious, “girls like her, girls like she used to be who turn into girls like she is now, get a guy’s attention, a good-lookin’ guy like that, and they can go—”
Deck cut him off. “Chace, you know Emme. You know that’s bullshit. She’s always known her own mind. And she’s always been cool. Even when she wasn’t a knockout, she wasn’t that kind of person.”
“It’s been years, Deck,” Chace reminded him. “A lot of them. People change, and it isn’t lost on either of us she has in a big way.”
“Yeah, and I just met her on the street. I’m havin’ dinner with her tonight and she looks good, man, but she acts the same. And her man is a dick but he’s also a moron. So he’s no boss,” Deck declared and looked at Shaughnessy. “And you just got yourself a maverick.”
The mood in the room shifted. It had been alert. Now it was relieved.
Shaughnessy was the only one who didn’t want Deck stepping in.
The rest of them, after all they’d seen for the past few years, wanted this done, and they were willing to take risks to get that.
“Terrific,” Shaughnessy muttered, his eyes moving through the room.
“Decker, this needs to be discussed,” Douglas stated, and Deck looked to him.
“You want me on the team, we talk money. I’ll give a discount, see this shit sorted. I’ll want a full brief. I’ll want the entire file. I won’t take orders. I’ll keep you in the know of what I do and what I find. But, just sayin’, that woman means something to me.” He threw out a hand toward the whiteboard. “So even if you don’t put me on the team and pay me, I’ll still be seein’ her clear of this shit.”
“You can’t let her know we’re investigating her boyfriend,” Carole said swiftly.
“This isn’t my first rodeo,” Deck returned. “What’s goin’ down, I wouldn’t fuck your investigation. But she’s still clear and she’s clear in no more than a week. Not months. Not as long as it’ll take you to track this crew, the way you’re goin’, and stop their shit.”
“As contract to this task force, you cannot engage in illegal activities. We can’t prosecute with fruit from the poisonous tree,” Douglas told him.
“Again, not my first rodeo,” Deck replied.
“You have a crew or do you work alone?” Henry asked.
“This, I’ll be bringin’ in my crew,” Deck answered.
“They’ll all need to see me,” Douglas stated. “Contract is signed, you all work for my department until the case is done.”
Deck nodded and his eyes went to Chace. “Want a picture of that board, want the file.”
“Deck, not sure this is a good idea. You got a conflict of interest with this—”
Deck again cut Chace off. “This is Emme.”
“I know it’s Emme,” Chace shot back, concerned for Deck and losing patience because of it. “Until just now, I had no idea you’d react the way you have when you saw it was Emme. So Emme’s the goddamned conflict of interest.”
“You know her,” Deck whispered, also losing patience, and he watched his friend’s face. Definite concern but also indecision.
He knew Emme.
Chace went from the academy into Carnal’s Police Department and stayed there but that didn’t mean Deck didn’t spend time with Chace throughout all Deck’s travels. Chace had met Elsbeth. Chace had spent time with her. And with Elsbeth came Emme. So Chace had spent time with Emme too.
“Her change is remarkable, Deck,” Chace noted again. “That’s something to take into account.”
At his words, Deck felt the ghost of her fingers digging into his shoulder through his coat. Saw the dimple. Heard her call him honey.
And he knew her history. Elsbeth told him. He knew what she’d survived. He knew what made her what she was.
He didn’t know what made her what she was now, but he was going to find out at dinner.
Last, he knew Emme would not be a part of a crew who burgled homes across an entire county and recruited high school students to do it. Not for the attention of the likes Dane McFarland. Not for money. Not for power. Not for anything.
“She’s up first. I investigate her. Clear her. Then clear her of this shit,” Deck stated.
“You work that with me,” Chace returned.
“Suit yourself. But dinner with Emme tonight is just her and me.”
Chace studied him.
Deck took it then looked to Douglas. “You got a file for me?”
“It’ll be delivered to your house by three thirty,” Douglas replied.
“Contracts will be emailed to you by then. My crew will be in tomorrow at eight to be deputized,” Deck replied.
“You gonna be with them?” Douglas asked.
“Wouldn’t miss that shit for the world,” Deck answered, cut his eyes through the people in the room, noting Henry Gibbons looked amused, Mick Shaughnessy looked annoyed, Carole Weatherspoon looked reflective and Chace still looked worried.
Then he walked out of office, out of the station and to his truck.