1. Tell us 5 random fact very few people know about you?
1. I’m obsessed with cooking shows (if CHOPPED is on, I’ll get nothing done)
2. I go through, and I’m not even kidding, at least three cell phones a year. I have a bad habit of dropping them or losing them in the backseat of cabs (like in Vegas last year)
3. I’ve been married for nearly 10 years to my right-out-of-high-school sweetheart
4. I can play the piano
5. I’m terrified of flying. You should see me on a plane. ;)

2. What's the last book you read?
Pretty Little Things by Teresa Mummert. I just finished this evening, and it was FANTASTIC.

5.  What are your 5 favorite books and movies?
That’s another hard one!
My favorite five movies this month would be Ever After, Enchanted, Desperately Seeking Susan, West Side Story, and Washington Square (this is likely to change in a few months)!
My favorite books would be The Hunger Games trilogy, Howl’s Moving Castle, and anything Nora Roberts.

10.Top place to visit on your bucket list?
Australia and Hawaii

Emily Snow is the New York Times and USA Today bestselling author of the DEVOURED series (October 2012, January 2013) and TIDAL (December 2012). She loves books, sexy bad boys, and really loud rock music, so naturally, she writes stories about all three.
Connect with Emily on Facebook, Twitter, Goodreads, & her Blog. 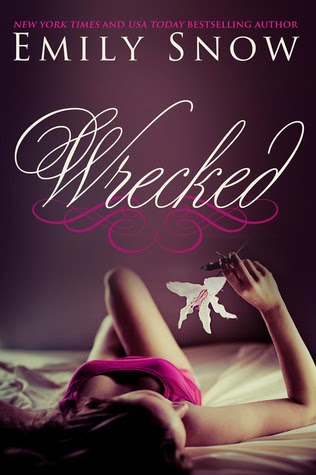 
Summary:
Ever since Lily died two years ago, Evie has been lost. She exists but doesn’t live. And she copes the only way she knows how: by wrecking things.

She exposes her dad’s affairs, ends things with her longtime boyfriend, and just last semester, she destroyed her music scholarship. Desperate to break away from all the destruction she’s caused and start over, Evie reinvents herself at her new university.

But then Rhys, her new voice instructor, happens. He’s gorgeous, insanely talented and apart of the dark past she’s trying to overcome. Rhys’s brother is the reason why Evie's life is such a mess right now, the reason why Lily, Evie's sister, is dead. And even though Rhys is the last person Evie should ever want, for the first time in two years, wrecking things seems…right.


Better even, check out chapter 1 on Emily's Website!
(Can I just say, dying to get my hands on an ARC!)
Email ThisBlogThis!Share to TwitterShare to FacebookShare to Pinterest
Labels: Emily Snow, kiss & tell