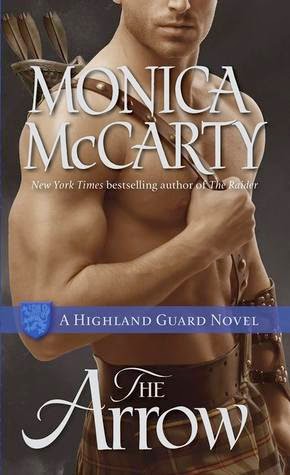 As King Robert the Bruce of Scotland plots to retake his English occupied castles, he needs the stealth and skill of his elite soldiers, the Highland Guard. Fearless and indomitable, no men are more loyal to their king, or cherished by the women they love.

The talents of legendary marksman Gregor “Arrow” MacGregor are crucial now, as Bruce moves to reclaim his Scottish holdings. Gregor is considered the most handsome man in Scotland, and his fame as an archer is rivaled only by his reputation with the lasses as a heartbreaker. But when his infamous face is exposed during a covert mission, Gregor is forced to lay low. He returns home only to find a new battle waiting: a daring game of seduction involving his now very grown up and very desirable ward, Cate of Lochmaben.

A born fighter, Cate was clinging to life when Gregor rescued her after a vicious English raid on her village left her mother dead. But five years later, the once scrappy orphan Gregor took under his protection has become a woman. Brave, strong, and skilled in warfare, Cate is determined to lay claim to the warrior who refuses to be trapped. The heat in his eyes tells her she has his attention . . . and his desire. But will Gregor allow his heart to surrender before danger finds them, and the truth of Cate’s identity is revealed?

So I got to admit two things:

I did the blasphemous thing of reading this out of order. Yeah, I know! Terrible. I should really say I regret it- but I don't.
AND
I totally and utterly fell for the Highlander hottie fantasy. Yes, my dear reading buddies, you know who you are, shall gloat ever so happy over this one. I kinda might have tried to disillusion them about Scottish men... and I might have kinda pointed out how unrealistic all those Highlander romances are....aaaand I might kinda have laughed about reading them, possibly said they weren't for me? ok. I kinda just did that. Buuuut in my defense. I am actually right, in most of the cases. Apparently McCarty did proof me wrong. In the latter rather than the former. Let's not go into the whole Highlander hottie thingy... I lived in the Highlands, I was thoroughly disillusioned. -And then I read McCarty's books.

The plot is a bit- well actually a lot (to be honest)- your classic romance run-down. It starts with some background to the MCs, then there are some sweet tensions, a wee bit of -in this case rather delectable- smut, the realisation of the big L, heartbreak at around 70%. and the HEA. But what makes this so much fun, is the setting and the action that is thrown in. McCarthy has done lots of research and while most of the characters a fictional, most of the plot is obviously totally fictional- she carefully set it in historical accurate circumstances and added several well portrait historical characters into the fold. This makes it somewhat not only a pleasure to read, it makes it feel realistic, like McCarthy is giving us a window to the past. Albeit it's a rather cute and fluffy one.

The world building is for the same reasons great. It's realistic, no thin silky gowns,- they do get cold, have drafty castles.Which gives me endless pleasure, cause frankly, one of my biggest issues in most of the Highlander romp, they portray Scotland as this warm and sunny place...which leaves me to question: have they been in Scotland?! It's an incredibly beautiful place, don't misunderstand me. But sunny and warm- it ain't not!

The character building is the best part. This is definitely a character driven series. Well, set around 10 awesome, hot and strong Men, I guess that is to be expected, isn't it? McCarthy however, manages to make each one of the guys distinct- and frankly with all the nicknames and the heavy list of characters, I kinda was worried I won't remember who is who. But no such problems, I only read three of these, but I know the Highland Guards and their families quite well actually. And more so I care! I really like them all. Each book is the story of one of them and their love interest. But the story weaves between them, they are linked by historical events, friendships evolve and one finds new sides to each character in each book, even when they are the support cast.
Which leaves me to admit yet another thing- you could do this as a standalone- buuuut maybe don't. Also, maybe don't read these out of order? I mean it can be done. I don't think it's a biggy, no big spoilers or anything. But one does miss out on subtle little things, which are what I think makes this a good series.

The writing style is beautiful. McCarthy has found a way to express things appropriate for the historical and geographic setting without being to over the top so it's easy to read. But more so, McCarthy's prose evokes memories of my time in the Highlands, her descriptions are simply beautiful. She gets it just right.

So I have been officially proven wrong. I DO get what the hype over the Highland romps is about- well at least in this case I do. And I shall be a good girl and go back and start reading them in order.
And yes I intend to read every single one of them!