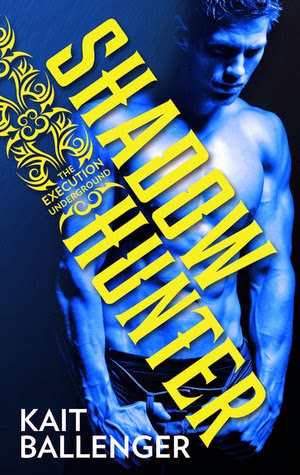 See where it all began in this exciting prequel to The Execution Underground, Kait Ballenger’s sexy paranormal series about the men who hunt evil and the women who love them.

Vampire hunter Damon Brock’s first assignment with the Execution Underground is Rochester, New York. But he isn’t the only hunter in town gunning for vamp blood. Tiffany Solow is ruthless when it comes to slaying the monsters that destroyed her family—and she works solo. But when she meets the mysterious hunter who wants more than just her turf, the line between good and evil blurs as they must decide between their lifelong beliefs…and their newfound desires

The end of this?! Brilliant!!
But let me warn you, right now, it's a cliffy.

This also left me with the dilemma on how to rate it. Because frankly I had a few issues with the rest of it:

When I started it, I immediately thought, that I will struggle with this. Because frankly, I didn't like the writing style. Then in the second chapter I was actually ok with the writing style. And as I read on, I realised that my issue was Damon's POV. The two POV as distinctively different written. So different that I every single time was taken aback by Damon's and though I found it got a wee bit better, I just don't like it. I am still surprised about it and can't really explain why. It was expression that were use, the style of writing, it felt over the top, too put on. And there is the main crux of my rating. If I don't like the writing style- I find it impossible to get into the book.
Still as I was fine with Tiffany (which I still find kinda odd btw), I am left wishing I would have liked it more.. and even contemplating giving the next book a try.

The reason for that is the ending. Just super brilliant! I was so sure Ballenger is not going to go there, that when she did, I was beyond shocked. The story line is in many ways , typical PNR and tortured alpha Hero so there weren't many surprises. Lost of heartstrings were pulled, quite a bit of rather captivating action was thrown in and plenty of smut was added.

The character building was - uhm- honestly I don't know how I feel about it. There were the tortured star-crossed lovers. But while I think that Ballenger did the character building of both MCs quite comprehensively, I know loads about them, I don't feel like I know them. I couldn't really connect to either of them, because there was too much cliche stuff going on in my opinion: insta-lust, star-crossed lovers, tortured hero, alpha dudes, V-cards... it was all thrown in. But actually I honestly think, loads of people will not only have no issues with that, they will love it.
The villains were seriously too over the top for my taste. It made the whole thing nearly comical and I found it destroyed the hype and tension Ballenger had been building up.

The world building is actually quite well done, this is clearly a set up for the novels that are to come and as such, it did a very good job. There are quite a few adventures, Supernaturals and love stories ahead that much I can tell you.

Which leaves me with the big question; will I read the next instalment? Honestly I don't know. But only because of my issues with Damon's POV. I actually do hope that I would like the next book... but then again, what if I don't?
I guess the jury is still out on that one.


If you are a PNR lover, give this a try- and then you could be my test reader for the next one! *smirks* yep, definitely a great plan, don't you think?