Review: All Lined Up by Cora Carmack 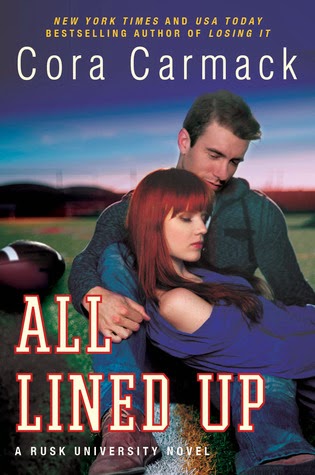 Summary:
New York Times and USA Today bestselling author Cora Carmack follows up her trio of hits—Losing It, Faking It, and Finding It—with this thrilling first novel in an explosive series bursting with the Texas flavor, edge, and steamy romance of Friday Night Lights.

In Texas, two things are cherished above all else—football and gossip. My life has always been ruled by both.

Dallas Cole loathes football. That's what happens when you spend your whole childhood coming in second to a sport. College is her time to step out of the bleachers, and put the playing field (and the players) in her past.

But life doesn't always go as planned. As if going to the same college as her football star ex wasn’t bad enough, her father, a Texas high school coaching phenom, has decided to make the jump to college ball… as the new head coach at Rusk University. Dallas finds herself in the shadows of her father and football all over again.

Carson McClain is determined to go from second-string quarterback to the starting line-up. He needs the scholarship and the future that football provides. But when a beautiful redhead literally falls into his life, his focus is more than tested. It's obliterated.

And neither of them know how to walk away from the attraction they feel.

“I can’t walk away from you because I don’t want to. There are a thousand things I want and need to do, but you trump all of them. You drive me to distraction, and all I want to do is get lost in you . All I want to do is make you lose it, too. “


It took me long enough to read this! Well, actually it took me long enough to get around to reading this. Once I finally found a moment to read, I did so in one sitting.
And let me tell you, Carmack did it again. Well, actually no that’s not quite right, she out done all her previous works. This is by far my favorite of her books.&nbsp
The story line has Carmack written all over it. So if you like her books- you going to love this one. But somehow, while the focus is on obviously on the romance, there are many threads binding this one together. So what at first glance looks like your really well written cute and fluffy, turn out to have way more depth to it than one first realises. Only while writing this review I am slowly grasping how much has been packed into this. Carmack brought the love of dance and football, the relationship between father and daughter, and last but not least Texas into this one. It’s less angsty then her previous books, more subtle but just as much character driven as all her works
The only critic I would have is that some of the tensions just conveniently went away or ended up being a non-issue. But then again, I probably would have complained, that there was too much drama if Carmack would have taken a different route.

You know what a sucker I am for great characters! And in this one, I actually loved every single character. In fact, I love them so much that I am hoping that Carmack is going to to a book for most of the support characters... Torres, Ryan, even Coach Oz.
Dallas was easy to relate to. Her difficulties, her ambitions and her passions rang true just as much as her doubts, fears and commitment issues. Carson, oh well, Carson... He is your Carmack hottie with all the great character treats and great sense of humor. Simply my favorite male MC of Carmack so far. He totally out done my old favorite Hunter, by MILES


"In the end, he picks a television show on Netflix instead of a movie....something British about time travel. He doesn't start it at the beginning, but instead starts me on an episode from one of the later seasons that he says can stand alone. It's a little cheesy, with some kind of techno sci-fi introduction music, but he seems excited about it"

Both MC’s battle with expectations, try to overcome fears and fight for high dreams. It’s relatable, in that we all do that in that age. Carmack however beautifully describes their battles, their worries and most of all their passions. The reason they dream high.
The relationship between Dallas and her dad. *sigh* Fathers and daughters that are both stubborn that somehow struggle to find their way forward in their relationship. Gosh, it would be impossible to relate to them more


“He’d be wishing a lot harder if you’d added my suggestion.”

“Why don’t you go mentally scar a band member or something?”

My favorite part of the entire book though are the interactions and relationships between all the characters. They are so well written, they feel real. I feel like I got a glimpse into a Texas Football team, like I became friends with some of them. Well, as I said, a sucker for character driven stories, but only when the characters are so well written that I feel like I know them for real. More than any other of her novels, Carmack got it right this time. To be honest, so much of the novel rang true for me because I could relate to so many aspects of it, despite the fact that I know really little about Football and have never been in Texas.


“ You're the thing that quiets all my worries and doubts and fears. You’re it for me. So fun if you’d like, but I’ll follow. You can try to hold me at an arms length, but I’ll never stop trying to pull you close.”


love Carmack’s writing style. One of the reason’s I’ve read every single thing of hers I got my hands on. I loved her debut Losing it. It’s great. But this, I way better. It’s amazing to see how far Carmack has come, how much she honed her craft. Seriously impressive.

So as I  traveled to BEA when I finally got around to read this. And frankly it couldn’t have been be more appropriate, because I ended up meeting Carmack! Which is still a highlight that makes me feel more patient waiting for Silas Book.. *soon*!

When I read Behind the Book, I wanted to hug Carmack! (well e-hug her, I’m not particularly touchy feely) It made everything so much more meaningful. I think lots of us gals can relate Fathers & Daughter has inspired a many great minds for a reason. But more so, I think being an expat made most of what she said resonate in my heart. THANK YOU, Cora *insert big hug*! It’s the most beautiful way any one has reminded me of my father, my relationship with him, my upbringing and my home!

In my opinion Carmack’s best novel to date. An absolute must read!


This is your normal text here but the text inside these tags is a spoiler!. And then you can keep writing over here.
Email ThisBlogThis!Share to TwitterShare to FacebookShare to Pinterest