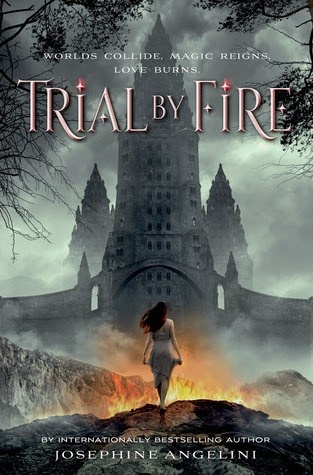 Summary:
This world is trying to kill Lily Proctor. Her life-threatening allergies keep her from enjoying experiences that others in her hometown of Salem take for granted, which is why she is determined to enjoy her first high school party with her best friend and longtime crush, Tristan. But after a humiliating incident in front of half her graduating class, Lily wishes she could just disappear.

Suddenly, Lily is in a different Salem—one overrun with horrifying creatures and ruled by powerful women called Crucibles. Strongest and cruelest of them all is Lillian . . . Lily's other self in this alternate universe.

What makes Lily weak at home is what makes her extraordinary in New Salem. In this confusing world, Lily is torn between responsibilities she can't hope to shoulder alone and a love she never expected.


Sometimes going into a book without reading the synopsis is a really good idea. I just read the synopsis before writing this review and even though it is intriguing, I wouldn’t have enjoyed this book in the beginning as much as I did if I knew what to expect. Even though Trial by Fire is a book with a promising plot and intriguing possibilities, it lacks because for me it tries too hard to stay in its YA genre. Josephine Angelini is a talented author no doubt. The writing style is engrossing, the story doesn’t ever slow down, the romance isn’t too demanding but at the same time, there is too much happening at once. She tries to do everything right by the book but I guess trying to keep up with so many things in one book and executing it with characters that are bearable if not very likable turned out to be too demanding.

We have Lily, a teenage girl with severe allergies that have kept her isolated in a way no human, less a high school kid would like to be. She has a mother who’s the crazy woman of town, a father who has all but abandoned his family cause of his wife’s psychotic ramblings, a best friend who is a player and the guy she thinks she’s in love with. When her best friend/forever crush finally kisses her, she hopes to make it last for as long as she can. But her hopes crash with a very humiliating night at a party she hoped would bring her closer to Tristan. The following day, feeling utterly miserable, she drops her guard and is carried away to another Salem in another universe by none other than her witch self in that universe.

Like I said, interesting concept. Who doesn’t dig a plot based on parallel universes? But if the author had only focused on that. Not only is the new Salem highly advanced in terms of science, it also is ruled by Witches who are greatly despised and feared. I don’t mean to stay that the execution isn’t done well. The author paints out a descriptive alter universe with science experiments gone horribly wrong and humans with the power of transforming energy within their bodies, and then Witches who transform the energy and then pass it to their “Mechanics”. It’s all good in theory but when it came to the characters that were in the middle of all of it; it didn’t work out for me like I’d hoped it would.

The starting few chapters are too YA-like to even talk about, but as soon as Lily gets to Salem, the story takes off. I liked how there were similarities in both worlds when it came to history and discoveries but I’m not sure how I feel about the humans being the same too. I understand that Lillian would have a sister and mother like Lily but I feel like Tristan was put in there just for making it convenient for Lily. Or for her to realize every time she was around Rowen, how much her love towards Tristan was more like an infatuation. Speaking of Rowen, I understood his attraction and simultaneous trust issues towards Lily but I don’t understand why Lily suddenly knew she fell in love with him. Okay, he was good looking, okay, he was her knight in shining armor from the moment she had met him, but come on! Isn’t it too YA to just fall in love so suddenly and do everything for the sake of a person you just met a few weeks (days?) ago?

When it comes to rating a book, the characters and their relationships together are a crucial part of the stars I give it. In this book, I couldn’t really bring myself to care about anyone of them. There were deaths, murders to be exact, carried out on because Lillian was too stubborn and conceited and powerful but it didn’t really affect me, you know? I wish there was some light shed on Lillian rather than Lily. The story only gives us an inclination of Lillian traveling to other universes and seeing something that terrifies her so much that she decides to go on a killing binge. Her actions and ruthlessness and general “sacrifice” she believed to be making for Rowen would have made more sense to me then. Then there were other villain-y characters that turned out to be marshmallows .It was disappointing.

The big fight in the end did not make sense to me at all. I get the idea of why it happened but it happened so suddenly that I felt like I had missed out on something. Even though the story keeps a good pace throughout, the ending felt terribly rushed to me. I truly feel that if there was more focus on “why” everything was happening I would have liked it better.