Review: Echoes of Us by Kat Zhang 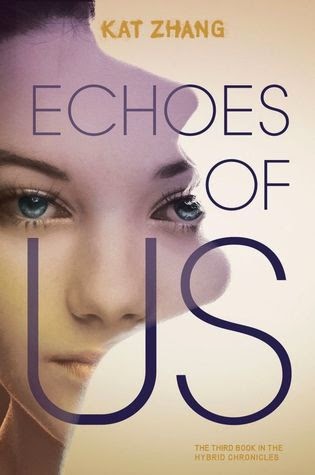 To change the world, I may lose everything

All Eva ever wanted was the chance to be herself. But in the Americas, to be hybrid—to share your body with a second soul—is not tolerated past childhood. Now Eva and Addie, her sister soul, are constantly on the move, hiding from the officials who seek to capture them. But the tide is changing. A revolution is brewing, and people are starting to question the hybrids' mistreatment.

Then Marion, an ambitious reporter, offers Eva and Addie a daring proposal: If they go undercover and film the wretched conditions of a hybrid institution, she will not only rescue them, she'll find a way to free Jackson, the boy Addie loves. It's risky, and Eva will have to leave Ryan and her friends behind, but if she succeeds, it could also tip the scales forever and lead to hybrid freedom.

As Eva and Addie walk into danger, they cling to each other and the hope of a better future. But the price they might pay is higher than they ever could have imagined.

I wouldn't say that I like this series as a whole but I certainly think that this was as good an ending as could be expected.

This series has never been one of my favorites but the writing style has pulled me in after every release without fail. The last book in The Hybrid Chronicles trilogy by Kat Zhang isn’t the best in the series but it isn’t the worst either.

A little bit on the story: Eva and Addie are hiding with the rest of the group, as they have been since being rescued from Normandi forever ago. The second book ended with Jackson being caught and the others being on the run after their pictures were circulated all over media for their “little” stunt. There is a lot of sulking and hiding and Eva martyring herself and Addie over and over and over till the end of the book. Only this time, we don’t have to worry about reading that again.

I know I don’t particularly sound pleased in my review so why the 3 stars you ask? It’s actually 2.5 and mainly for Zhang’s writing style. Even though I’m not a fan of the characters, the way she portrays compassion and kindness in little acts all over the book makes me feel that little flutter somewhere inside my heart. And that’s what I really appreciate about any story.

Having said that, I’ve gotta admit that Eva and her acts of selflessness that bordered on martyrdom got me riled up every.single.time. Even when she questioned herself and hesitated on trusting people, even when she acknowledged being rash and impulsive, even when she knew she would be jeopardizing everyone’s plans, she went ahead with her unplanned, irrational agenda anyway. I know it all worked out in the end for her but it shouldn’t have! I felt that being the protagonist made her escaping any shithole she dragged herself into very convenient. As for the other characters, I felt Jackson and Ryan didn’t really play any role other than being the love interests in this book and this time they weren’t even making things complicated for Addie and Eva! So they were practically useless. As for the obsession with Jaime, I don’t care about his situation anymore to give a fuck. The others from the old group were hardly mentioned and Marion, the new reporter who was introduced in the story from nowhere, stole away the spotlight.

The ending was as dull as could be expected. Although, I was a little dumbstruck by the events that unfolded during the end (view spoiler). It wasn’t bad, I mean I don’t really think there could have been a better ending to this series but it’s just that I’m so disappointed. The concept of Hybrids is what roped me in at the first place; there was such potential, so much to be explored. But alas, it wasn’t meant to be and maybe that’s the reason I sound so bitter. Not once in this entire series was it mentioned why the government of America alone considered looking for a cure for Hybrids. Sure, there were vague descriptions of some war that ended up with America secluding itself from other nations and trying to curb the Hybrids because they were supposed to be.. volatile? Crazy? Uncontrollable? Unpredictable? I honestly don’t know and that pisses me off.

Apart from the lack of plot building, the idea of two souls in a single body, of how they normally settled in relationships or jobs or real lives is barely shed any light upon. Eva and Addie loved different individuals and only an aspect of their relationship was reflected in the trilogy. I could ignore this by saying that the author wanted to focus on the mistreatment of the hybrids and the rebellion but without getting a good explanation of its cause, I can’t.

In the end, I’m sort of glad to be done with the series. I didn’t have high hopes so it wasn’t as awful as the second book for me. At the same time, I’m also a little sad that such a promising concept was awfully wasted on the same run-of-the-mill-teenager-instigating-and-winning-a-rebellion-against-the-government storyline when it had so many other aspects to talk about.