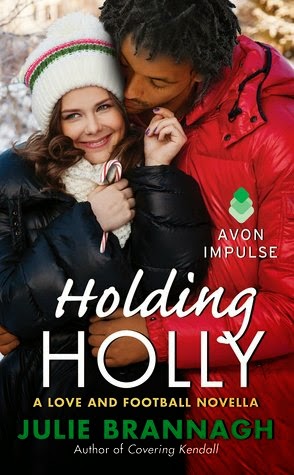 Holly Reynolds has a secret. Make that two. The first involves upholding her grandmother’s hobby of answering Dear Santa letters from dozens of local schoolchildren. The second ... well, he just came strolling in the door.

For the last two years, Holly has not been able to stop thinking about gorgeous Seattle Shark Derrick Collins. His on-field exploits induce nightmares in quarterbacks across the NFL, but she knows he has a heart of gold.

Derrick has never known a woman he wanted to bring home to meet his family, mostly because he keeps picking the wrong ones—until he runs into sweet, shy Holly Reynolds. Different from anyone he’s ever known, Derrick realizes she might just be everything he needs.

When he discovers her holiday letter writing, he is determined to play Santa too. And as the pair team up to bring joy to one little boy very much in need, they discover the most precious Christmas gift of all: love.

I had high hopes for this one. Seriously HIGH hopes. I've been meaning to read the series, I mean cute & fluffy with a hot sport dude? YUM! What could go wrong? Right?

As I was reading Holding Holly my hope was utterly shattered to pieces.
I mean UTTERLY.


Look if Brannagh would be a man, I'd be ranting on how misogynistic she was.
Cause honestly there was not a single decent female character in this novella. First they were total dizz-balls, then they were super-uber-naive and cliche. Really. EVERY single female character. Not just one.

Holly was beyond naive and shy, to the degree that she came across as a tad stupid. I know loads of shy gals, they don't behave like that. I know loads of naive chicks, they don't manage to be THAT naive.
The mother and grandmother of Derrick -OMG!! - so all they can do is fuss, fuss more, shop, shop even more, fuss a little more, then do crafty shit and add some more shopping and fussing to it.

Every single female weird or quirky. They all have an thing about clothing- I mean A THING. In fact every single female seems obsessed with shopping. Every female is at least at some point totally helpless without Mr. I am so awesome Derrick. See??!! Misogynistic.

Oh and to top that there is Derrick:
I really didn't care much for him. While on the one hand he claims to be shy, he is also a total show off- how does that work? A shy show off? Hmmmm. Whatevs.
He has a rather arrogant take on himself and looks down on others.

"He'd always loved a woman with some flesh on her bones. She probably thought her butt was too big, and that he didn't like the slight roll over the top of her jeans."


I rest my case. I won't even say the M-word again. I mean, you get my point.
The only redeeming quality he has. Is he is generous. Though that was stress a tad to much. Guess we gotta point out the good, when he is so full of crap?

The writing is alright, though I always was keenly aware that Brannagh was trying very hard to make this quirky. Sadly in my opinion, this is not quirky. It's at best over the top at worst silly.
The banter between Derrick and Holly was painful. Simply because mr. I-am-so-freakn-fab-its-painfull was condescending, was to involved in his awesomenss or was just an asshat.

"Derrick, what am I going to get you for Christmas?"
He laid his fingertips over her mouth."You don't have to buy me a thing."
" It's not fair."
"Okay, then. You win. Bake me some cookies or something. I would love that more than anything."
" What kind?"
"The same kind everyone else wants: chocolate chip"
She couldn't help but laugh. "Got it", she said.


Ok, someone needs to explain to me... why is she laughing? What's so funny? And: bake me some cookies or something... I really couldnt care less but... I would love that more than anything? For real?  Make up your mind, dude!

I just can't imagine someone actually does have a conversation like this. Well, to be honest if a guy would attempt to have a conversation like that with me... well, let's just say I would not be laughing, but spend my christmas happily with my granny and send him off to his awesome lonesomeness.
Another thing that kinda annoyed me was the money issue. It seems like every character was keenly aware of their finally differences. I dunno. Do people really think like that? I don't compare my clothes and the content of my valet constantly with a person I've just met. I try and get to know the person. I dunno. Maybe it's just me.

The plot is quite cute, but the whole character building or lack there of, ruined most of that.
To be honest, I think in the end the low rating does hinge on the fact that I really didn't like neither Derrick nor Holly.
In fact I was going to rate it 1,5 Stars, but in the end, I did like the rest of the team. Brannagh managed in those few pages to bring across a camaraderie between the guys. I Then I was wondering if maybe I should read a novel? Cause I still like the sporty hottie idea you know. Who knows, I might, one day.

This sadly did just not work for me.


This is your normal text here but the text inside these tags is a spoiler!. And then you can keep writing over here.
Email ThisBlogThis!Share to TwitterShare to FacebookShare to Pinterest
Labels: 2 Stars, Contemporary, Deniz, disappointing, meh, Review, Romance