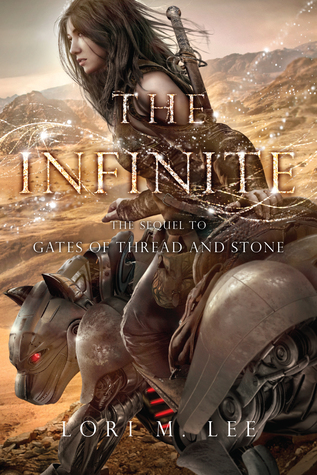 The walls of Ninurta keep its citizens safe.

Kai always believed the only danger to the city came from within. Now, with a rebel force threatening the fragile government, the walls have become more of a prison than ever.

To make matters worse, as Avan explores his new identity as an Infinite, Kai struggles to remind him what it means to be human. And she fears her brother, Reev, is involved with the rebels. With the two people she cares about most on opposite sides of a brewing war, Kai will do whatever it takes to bring peace. But she’s lost her power to manipulate the threads of time, and she learns that a civil war might be the beginning of something far worse that will crumble not only Ninurta’s walls but also the entire city.

In this thrilling sequel to Gates of Thread and Stone, Kai must decide how much of her humanity she’s willing to lose to protect the only family she’s ever known.

Just like Lee's debut novel I found myself rather wordless when it comes to review the Infinite.
There is much to say, but how to say it?
How does one express one's love for an author's prose? How does one explain how impressed and how moved one is by the talent of someone?
To be honest, I find myself lacking to do so. So I shall just say, that Lee has written herself into my heart. I love her prose. I adore it. And I think there will be little Lee could do to make me stop reading her books.

Sadly I also had huge expectations for the Infinite. To be honest I think,The Gates of Threads and Stone is a really hard act to follow, my expectations might have been a tad too high, a wee bit unfair. And while the writing style was poetic and beautiful just like I expected, the plot was a bit of let down for me.
The first half was really slow,at nearly 70% I was wondering what this was really all about... And at times it felt like a lot of world building was dumped at me. Very beautifully done world building mind you. But still, it was too slow for me. The last quarter though, was just like its prequel, enticing and fast paced. - and it left me with huge hopes for future novels...

The world building is fabulous! It's innovative and beautiful. Lee did go way beyond of what I expected. The world we got to know in the Infinite is a huge expansion from the first book. Not only that it made me look at The Gates of Threads and Stone from a different perspective. It made me appreciate Lee knowledge of her craft, and it made me greatly wonder where she is taking us next!

The character building is just like in the first book, well done. I care for the group of people we got to know, I adore Reeve & Kai. Love Avan and Mase. And it is beyond interesting to see how the Infinite look at the world. Lee managed to make me change my mind about characters several time over the last two books. Most of all though I did totally connect with Kai. I felt all she felt- her heartache, insecurities, her worries, her joy, happiness, I felt it all with her. Again, in my opinion, a credit to Lee's talent with words.

But while in the first book, I absolutely adored Avan and Kai's connection- I totally missed it this time around. I mean I get things are different. But the yoyo between them, while believable, felt to much.
I mean Kai was way too easily swayed back towards Kai, so after the twist at the town wall- I was heartbroken... And then next twist... and Kai just is ok with the rather thin explanation that she was given. I felt like- WHAT?! Nu-huh. Dude just not good enough. But she swooned and was heartbroken for the distance rather for the betrayal. Let's be clear. That's what it was: Betrayal. How could it be just so downplayed?

While the last book left me pondering about having one's choices taken away, this made me ponder about power and the infinite. I love the undercurrent subjects of this series.
This book while giving a few answer- very few - left me with even more questions. More mysteries I want to resolve and I hope that the next book will answer at least some of them.

So sadly I wasn't as fangirly about this as I was after reading Lee's stunning debut. And despite some minor issues with The Infinite, I loved it. I wish I would have liked it more, because I simply can't describe how much I do love Lee's writing. Then again, this is a good book. Don't get me wrong. It is. I can recommend this wonderful series to lovers of the genre and people who love reading beautiful prose.
And I can't wait to get my hands on Lee's next book. She is an author to watch out for, trust me!