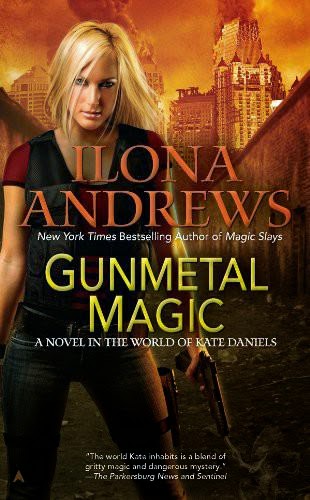 
After eviction from the Knights of Merciful Aid, Andrea is a wreck. She starts work for best pal PI Kate Daniels. Shapeshifters under Raphael Medrano — Clan Bouda male alpha, Andrea’s ex-lover — die suddenly at a dig site. With Raphael, she seeks killer in deep dark Atlanta. Her feelings for him may take a back seat to saving the world…
Bonus: Kate Daniels novella "Magic Gifts"


I started this whispersync-ing. - meaning, switching between reading the ebook and listening to the audio.
I love that feature btw. It's super awesome! Okay, Back to Gunmetal Magic. By the way this is the second time I read GM. I did this as a buddy read when it was just released, at that time I hadn't read any Ilona Andrews book. I had no idea about the Kate Daniels World. That time I rated it 3.5 Stars, because I liked the world building, the writing and quite liked Andrea. But somehow it was just good for me. It works as a standalone, but please don't read it as one!
Now that I got the KD bug and I've read all the previous instalments (including the novellas) this was way better. All the previous world building and character building, makes this way better.

As I said I started this whispersync-ing. But as the novel went on, I just stayed with the audio. This is, just like all Ilona Andrews novels, narrated by Renee Raudman. And I solemnly swear I shall listen all Ilona Andrews novels as audiobooks as long as Raudman narrated them. She does an absolutely awesome job. And while I think that having read the previous instalments, made this one better. Raudman's narration makes this even more amazing.

I officially got the KD bug- So clearly I am enjoying the series.
The thing I adore and am every single instalment amazed by is the world building. And GM is not different. I love Egyptian Mythology, so was super excited that Andrews used it as an inspiration. It's really fabulous what they did, the way it fits in the ever expanding world of KD, but how each and every novel they come up with something new and how they add new pieces and ideas to previously known mythology. Just amazing!
The story line was similar to the previous, except Kate makes only a few minor appearances, this is all about Andrea. ( and Raphael). There is a mystery, lots of fighting, lots of fighting love, great fight scenes, and a fabulous showdown.... oh and some happy romancing ... you know the usual KD shenanigans. I like these fast paced story lines. So this was really enjoyable as well, even the second time around.

The most interesting part for me was the character building. It's what made such a difference for me. And why I would never advice any one to do what I did. DON'T READ THIS AS A STANDALONE. Trust me. Just don't do it.
Don't misunderstand me, It does work as one. But the slow-burn interaction between the characters is one of the great things in this series. The love stories are slow burn, but so are all the relationships. And by that I mean friendships, business relations and romances alike. The characters change subtle they evolve from novel to novel. And that's what made me get the bug. To be honest the first two novels in the series were good... but they only get really good after book three. And that is in huge parts to do with the above mentioned.
For me the cast of KD-world has taken form, I get where they coming from, who they are, I feel with them. I love some and loath some.
It's the absolutely best part of the series. And Gunmetal Magic fits right in.
Now honestly, I prefer Kate over Andrea. But I adore the female characters that Andrews have created in this series. I love how kick-ass and clever they are. Seriously awesome!


If you haven't read the series yet... I can only recommend it.
I for one, shall go on with the next instalment. I got the bug after all.. feeding it until I run out of KD books