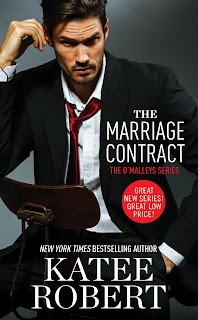 Teague O'Malley hates pretty much everything associated with his family's name. And when his father orders him to marry Callista Sheridan to create a "business" alliance, Teague's ready to tell his dad exactly where he can stuff his millions. But then Teague actually meets his new fiancée, sees the bruises on her neck and the fight still left in her big blue eyes, and vows he will do everything in his power to protect her.

Everyone knows the O'Malleys have a dangerous reputation. But Callie wasn't aware just what that meant until she saw Teague, the embodiment of lethal grace and coiled power. His slightest touch sizzles through her. But the closer they get, the more trouble they're in. Because Callie's keeping a dark secret-and what Teague doesn't know could get him killed.

Katee Robert learned to tell stories at her grandpa's knee. Her favorites then were the rather epic adventures of The Three Bears, but at age twelve she discovered romance novels and never looked back. Though she dabbled in writing, life got in the way-as it often does-and she spent a few years traveling, living in both Philadelphia and Germany. In between traveling and raising her two wee ones, she had the crazy idea that she'd like to write a book and try to get published. Her first novel was an epic fantasy that, God willing, will never see the light of day. From there, she dabbled in YA and horror, before finally finding romance. Because, really, who wouldn't want to write entire books about the smoking-hot relationships between two people? She now spends her time-when not lost in Far Reach worlds-playing imaginary games with her wee ones, writing, ogling men, and planning for the inevitable zombie apocalypse.


The Marriage Contract surprised me. I expected cute & sizzling. Instead this was way more gansta & action. This is by no means a bad thing. Just rather surprising. Retrospectively I am not sure what formed my expectations. I can tell you, I looked at the cover and well, we all know I can be a total coverslut.. the pretty coupled with the title is what made me read the blurb. Which surprised me, because honestly I thought this would be one of those millionaire CEO romances. But the blurb promised different and different I got.
I never read anything by Roberts before The Marriage Contact. The Marriage Contract being the first in the O’Malleys series was another incentive for me to read this.

I like Robert's writing style. It’s to the point and modern. The smut is sizzling and the action scenes really well written. She has a good balance between being explicit enough to make an impact but not too explicit where I would just switch off. The writing is so well done, that I have a picture of each character in my head, of each scene. Would I be a film maker this would be one book I would definitely make into one!

The story line is interesting. The whole thing is fast paced and lots happens. Lots of action, lots of intrigue and politics. I thoroughly enjoyed reading this one, even if I could predict most of the plot way before it happened.There was one exception actually: I really can’t mention what it was, because it would be a major spoiler. But let’s just say I am still shocked Robert went that way- not to mention heartbroken I had hopes in that direction. The romance is quite tender but also take a back seat to all the mob stuff that’s going down - which in my opinion worked mostly in the favour of the story. Except that some of the romance felt rather insta. Well, it’s definitely insta-lust all over. But it’s not instal-love really, just felt a bit fast. Still Robert managed to establish a rather sweet love story between Teague and Callista.
Robert did an amazing job at establishing the gritty and dangerous backdrop of the Boston mob scene. To be honest I know very little about the reality of it. But frankly I don’t really care if it is any where near to reality. It was so well done, I got it and I believe it. That’s good enough of me.

The character building was intriguing. I am looking forward to see where Robert is taking this large and interesting cast in the next book.
While this is Teague and Callista’s book- We get an insight into most of the players. The book is written from multiple POV, in third person.
I love Teague, despite that his martyr act kinda went on my nerves at time. Callista while I felt sympathetic to her situation, was actually rather spoilt. They both did however evolve and change. I hope that we still will get to see them as the story goes on. Because while their story is kinda done, it is definitely not over.

There is one last thing I wanna mention. Someone make this one into a film, please! It’s the kind of movie I would love.

A gritty, action packed beginning to a interesting series. I am looking forward to reading James and Carrigan's book.
Which leads me to the big question: When can I?!

She was so wrapped up in her misery, she didn’t realize she was no longer alone until a rough male voice cut through her spiraling thoughts. “Want a smoke?”
Callie opened her eyes to a man offering her an opened pack of cigarettes. He was attractive in a brutish sort of way, his jaw square, cheekbones to kill for, and shoulders filling out his expensive suit in a way that didn’t look the least bit comfortable.
“I don’t smoke.”
“Now’s as good a time to start as any.” He shook one out and handed it to her, and then lit the one dangling between his lips. “I hear we’re going to be married.”
This was Teague O’Malley? She tensed, but he seemed content to stand in this dark alley with her and share his cigarettes. Now that she knew what to look for, she recognized the same coloring that his father and older brother had—sun-darkened skin and near-black hair. His dark eyes weren’t as cold as Seamus’s, but that didn’t comfort her in the least. All it meant was that he was a better liar than his father was. “What do you think about that?”
He shrugged. “It doesn’t really matter what either of us thinks, does it?”
“No, I suppose it doesn’t.”
She wanted to know why he’d followed her out here—if there was something he’d wanted to say that couldn’t be said in front of both their combined families—but he seemed content to enjoy his cigarette in silence. Maybe he’d needed the respite as much as she had?
All too soon, it’d be time to step back into the chaos and let the events neither of them could stop begin, but right now they were just two strangers, sharing a moment of silence.
Can we really be strangers if we’re already engaged?
She pushed the thought away, determined to enjoy this stolen moment in time before reality set back in. By the time she finished her cigarette, her hands had almost stopped shaking. She crushed the remaining bit under the toe of her sky-high heels and turned for the door.
Only to find her way blocked by Teague.
He was taller up close, well over six feet, and broader as well. The man looked like a bruiser, which was fitting because it was exactly what he was. He stared down at her with beautiful dark eyes, and her demand that he get out of her way died in her throat. While she was debating her options, he reached up, quick as a snake, and snagged the silk scarf around her neck. She made a grab at it, but it was too late.
Teague took a step closer, and then another, backing her against the wall, his eyes narrowing at her neck. “Show me.”
“Leave me alone.” Was that her voice, weak and wavering? She took a shuddering breath, all her hard won calm disappearing. “Get out of my way.”
He kept going as if he hadn’t heard her, stopping less than an arm’s reach away. God, he seemed big this close up—bigger than Brendan, bigger than her brother had been. He cupped her chin, his grip painless but completely unmovable, and tilted her head back to bare her neck. “Who hurt you?” There was a promise of violence in every line of his body.
“No one.”
“Now, I may not be the smartest man in the world, Callista, but I know what the imprint of a man’s hands on a woman’s neck looks like.” His thumb moved, tracing the line of Brendan’s fingers that she could still feel digging into her skin. Teague’s touch didn’t hurt, though. It felt…almost good.
She swallowed, the move pressing her throat more firmly against his thumb. “It won’t happen again.”
“You’re right. Because I’m going to kill the bastard.” He kept stroking her skin, his touch doing strange things to parts of her body that weren’t anywhere near her neck. “Tell me his name.”
She wouldn’t, even if the man who’d hurt her wasn’t already dead. Even in their messed-up world, murder was a last resort—something to be avoided at all costs—not something you did for a woman you barely knew. “No.”
“Your father hasn’t been keeping what’s his safe.” Another stroke, this one closer to her jawline. “That’s his mistake—one I won’t be making as well. His name, Callista.”
She’d never considered herself one to crack under pressure, but this man put his hands on her and spoke in that quiet, confident way that promised violence to anyone who touched her, and she was dangerously close to losing control. Which kind of control was up for grabs, so she went with the least likely to reveal her secret.
She kissed him, her heels giving her enough height that she barely had to go up on her toes. Her lips brushed his and for one interminable second she was sure neither of them took a breath.
That was all it took.
He let go of her throat to cup the back of her head, and then she was in the middle of the single most devastating kiss of her life. His tongue stroked hers, claiming her mouth—her body—as his own. His hands stayed in place even as he continued the assault on her mouth, his touch headier than the nicotine. She arched against him, tilting her head to allow him better access, and he growled in approval.
Whatever she’d expected from this kiss, it certainly hadn’t been desire. Though desire was too tame a word. She’d felt desire before, and this wasn’t it. This was…need. All-consuming need that devoured everything in its path, leaving only destruction in its wake.