Review: The Werewolf Meets His Match by Kristen Painter 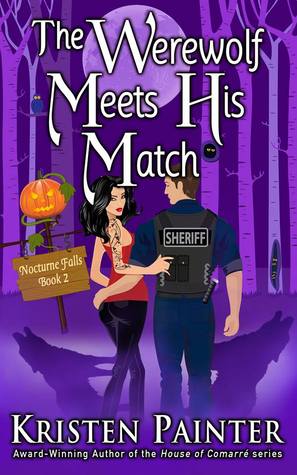 The Werewolf Meets His Match

Getting arrested wasn’t on werewolf Ivy Kincaid’s agenda when she arrived in Nocturne Falls, but her life rarely goes according to plan. The upside of spending the night in the local lock-up is finding a hotel room is no longer a worry...but the downside is the man she’s come to marry will get his first impression of her behind bars. Not exactly the way Ivy was hoping to meet her pack's sworn enemy...aka her fiancé.

Sheriff (and werewolf) Hank Merrow is the alpha's heir. Everything he's ever done, from becoming an Army Ranger to serving in law enforcement, has been in preparation for the day he’ll take over. Getting married to cement a shaky truce is no different. Hank will do his duty, even if it means shackling himself to a woman he has no intention of liking, let alone loving.

But Ivy is nothing like Hank expected. As feisty as she is beautiful, she's as determined as he is to make a go of marriage for the sake of peace between their packs. The trouble is, Ivy has secrets that could destroy everything Hank holds dear...including his newfound love for her.

Another fun instalment in a series, which is becoming fast one of my favorite cute & fluffy reads in 2015.

Just like the first book, The Vampire's Mail Order Bride,  I read The Werewolf Meets His Match in one sitting. It's cute, fun, entertaining and captivating.

This is set in the same town, Nocturne Falls. Which by the way is absolutely awesome. I love the idea of the towns history. Painter masterfully weaves reality and fantasy, which makes the town feel like a real place.. with a bit of magic.  The world building is on the light side, in compare to some of Painter's earlier works, which were intricate and mind-blowing. Nocturne Falls world building is somewhat lighter, but still extremely well done. It's definitely due to Painter's fabulous skills.

Painter does each and every time proof that she is a master of her craft. It doesn't matter if she writes, cute and fun novels like this one or intricate and darker ones like her Cresent City Series. Each novel is well constructed , thought through and incredibly beautiful written. Painters prose is one of my favorites. And this book makes no exception. It is beautifully written, the descriptions detailed and inspired. My favorite part of the book was when they were running in wolf form. Absolutely amazing! And the reason why Painter is one of my favorite authors. The prose is awe inspiring.

This is just like the previous novel completly character driven. I was looking forward to Hanks book. And disappointed I was not. I got a dose of the awesome sauce that is Hank and I am an utterly satisfied costumer.  Except, maybe Hank was a tad bit too perfect? But did that bother me? Nah!
Ivy is an interesting addition to the cast of the series and so is Sam - please let there be a book with him?!
I loved revisiting the characters from the previous novel. In just two books, I feel like I know all of them and I want more. As I was reading I found myself hoping that several characters will get their own book... the good news is that there will be at least two more novels in the series. Though I would happily read quite a few more than that (hint hint)

The plot was fast paced.  I loved the sizzling between Ivy and Hank. But my biggest issue with the book. It all happened so fast.  And that's also why I rated this a smidgen lower that the first novel. The miss-commitment-issues in me just couldn't wrap her head around how fast things kinda happened. I was totally taken aback in how Hank reacted to Ivy's secrets. Don't misunderstand me I loved it, but well, I found it a bit too perfect. Then there is my eternal shifter romance issues.. the mate thing. I still don't know where I stand with the shifter romance thing. I am not sure it's really my thing. BUT I didn't like this particular one, I loved the shifter politics, the pack- so I am not ready to give up on shifter romance as such. And Painter certainly is one to convert me to loving them.

So all I can do now: Wait for the next instalment of the series. And hope that Painter will write many more!