Review: A Dance of Cloaks by David Dalglish 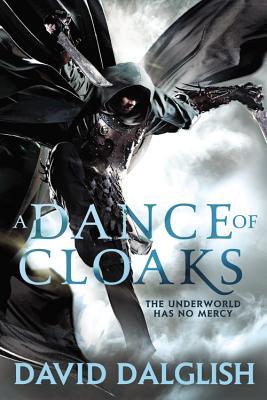 A Dance of Cloaks


Thren Felhorn is the greatest assassin of his time. Marshalling the thieves’ guilds under his control, he declares war against the Trifect, an allegiance of wealthy and powerful nobles.

Aaron Felhorn has been groomed since birth to be Thren’s heir. Sent to kill the daughter of a priest, Aaron instead risks his own life to protect her from the wrath of his guild. In doing so, he glimpses a world beyond poison, daggers, and the iron control of his father.

Guilds twist and turn, trading allegiances for survival. The Trifect weakens, its reputation broken, its money dwindling. The players take sides as the war nears its end, and Thren puts in motion a plan to execute hundreds.

Only Aaron can stop the massacre and protect those he loves…

Assassin or protector; every choice has its consequences.


It took me long enough to read this.
Which should give you an indication why my rating is not that great.
I need to point out, that I feel quite heartsore about it. I was really hoping I would love this.

The synopsis sounds great! And I was sure that the only thing that could go wrong here was that I didn't like the writing style- but thats not what happened.
Because I like Dalglish's writing style. If you would have asked me 10%in I would have told you - I think this is gonna be a winner.

The world building is complex and intriguing. I really like it as well. It's clever and interesting. I like the idea of the guilds. The set up should be a perfect fantasy for moi.

The story line is clever and multilayered.

So why do I think this is just ok? Well simply I really could not relate to a single character. I felt totally disconnected from each and everyone of them. And despite the fact that I like the writing and the world building, I found myself struggling through A Dance of Cloaks. I kept trying to somehow care about a character, any character. But they felt too sterile, too thought-through, too crafted. This is written in multiple POV , in third person. I am not sure if maybe there are too many POVs? Or possibly the third person just didn't work. The characters just feel disconnected. As I was reading A Dance of Cloaks I kept thinking how I couldn't find it in me to care... And I kinda forced myself to read on.

Don't get me wrong, it's not terrible or anything. It's just not enjoyable for me. And in the end, that's why I read novels, for the enjoyment of it. I read enough textbooks and other literature for the sake of reading them, I am not prepared to read a novel, just because I know it's well done and quite clever. My TBR is way to long for that. Hence I doubt that I will read on in the series.

But if you do like the genre? Please give this a go! As much as it was not for me. I still need to stress that this is well written, the world building is interesting to say the least and the storyline is complex and fascinating... And if you don't mind the character building this is an interesting start to the series.