Book Tour: Doing It For Love by Cassie Mae 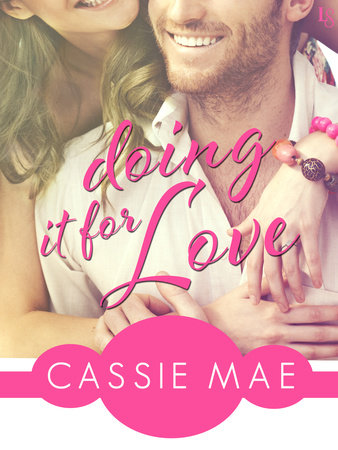 DOING IT FOR LOVE

Cassie Mae’s charming, sexy new
novel, perfect for fans of Emma Chase, puts a steamy twist on modern love as
one bride-to-be tries to put the spark back in the bedroom—by any means
necessary.
Elizabeth Fanning’s life looks
pretty perfect, judging by the diamond ring on her finger. Her fiancé, Landon,
is sweet, handsome, and hilarious. The trouble is, before they’ve even tied the
knot, their sex life has gone from mind-blowing to “meh”—and Liz isn’t ready to
be part of an old married couple. After a cathartic call to her best friend,
Liz comes up with a brilliant idea. She and Landon may never be able to
re-create the magic of their first time, but how amazing would their wedding
night be if everything below the neck was off-limits until then?
Liz thinks it’ll bring them closer
together. Landon’s convinced she’ll cave first. So they raise
the stakes: Whoever lasts longer gets to pick their honeymoon destination. With
her heart set on the Bahamas and Landon fighting for snowbound Utah, Liz simply
has to win. But pretty soon, her body is screaming for attention, and Landon’s
never seemed so far away. Has Liz’s experiment backfired? Losing their little competition
would be frustrating—but the one thing she can’t afford to lose is him.
BUY NOW
Amazon | B
& N | iTunes | Kobo

Cassie Mae (who dons the name Becca Ann on occasion) is the author of a few hundred—okay, maybe not that many—books. Since writing her bestselling debut, Reasons I Fell for the Funny Fat Friend, she has published books with Random House, Swoon Romance, and Tulip Romance. She has a favorite of all her babies, but no, she won’t tell you what it is (mainly because it changes depending on the day). Along with writing, Cassie likes to binge-watch Teen Wolf and The Big Bang Theory. She can quote Harry Potter lines quick as a whip. And she likes kissing her hubby, but only if his facial hair is trimmed. She also likes cheesecake to a very obsessive degree.

So to be honest, there are some authors, who's books I will just read, without regards to cover.. and .. uhm.. this is kinda embarrassing... the blurb. Mae happens to be one of them. I love her How To Series, so basically knowing this is new adult by Mae... was simply good enough for me to wanna get my hands on it.
I did read the blurb when I requested it... I really did... Promise! I did!
But when I started this- I was rather iffy about it. I wasn't sure if I was going to like it. At around 15% I didn't particularly like the heroine...
Then one of my reading buddies gave it 3 Stars- and I felt even more unsure.
So I put this aside for a while... a few weeks to be exact.
When I picked it up again, I thought of it as a chore- feeling I'd have to read it, because it was an ARC... And then.. well... I simply fell in love.

Before I gash about how Mae stole my stone heart - let me just get the negative out of the way
I didn't like Liz much for the first quarter of the book- I found she was manipulative and even more so she was a whiner. If you feel you vegetables- do something?! I could not relate to wedding dramas- since I had a super small and simple wedding, which is what I was more than happy with. I do however know that a lot of girls feel like Liz... so I kinda decided I could live with it.
And then as the story progressed I more and more grew to like Liz. But most importantly I totally related to her and Landon.
Which is part of the magic of this book.

Look this is the story after the HEA- well kind of. They are together, they know they love each other. It's basically the journey of two people who found their hearts. If you expect the usual romance plot- well you won't find it here.
There is very little romance cliche in this one- which I personally found so freakn awesome.
This is a different and wonderful look at love. Probably more realistic than most novel I have read. It's quirky and unique in the best way. I felt moved and touched by Doing It For Love. I laughed and smirked at the jokes and mishaps.
Though Liz and Landon's story and relationship is so different than mine and Mr. O - it also is so similar. The little insider things, the reality of family, the worries.. somehow I guess most couples have those and that's how Mae won me over.
It's a unique take on the romance novel- so a different really fun storyline

But the best part of this was the character building. Each of the character felt real. I feel like I got to know the entire cast. The families were totally interesting, I could so relate to it....I mean Landon's mother- lmao, damn she reminds me of mr. O's mum, different but oh so similar

SO one of the most moving romances I ever read. I think Mae written magic with this one.
Entertaining, sweet, fun, unique and touching!