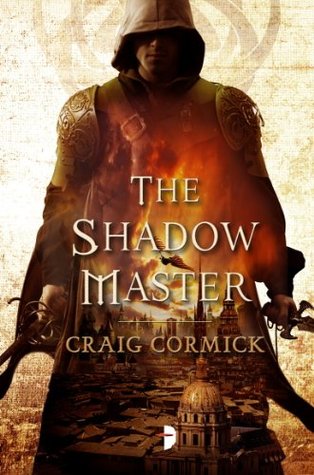 In a land riven with plague, inside the infamous Walled City, two families vie for control: the Medicis with their genius inventor Leonardo; the Lorraines with Galileo, the most brilliant alchemist of his generation.

And when two star-crossed lovers, one from either house, threaten the status quo, a third, shadowy power – one that forever seems a step ahead of all of the familial warring – plots and schemes, and bides its time, ready for the moment to attack...

Loved the world building- think the concept is an amazing idea.. but somehow this just didn't work for me.
Initially when I started this, I was totally blown away by it. The idea behind the world building? Genius.
The parallels between history and Shakespeare's works linked with the imaginative fantasy aspect? Just mindblowing.
And then.... I found myself struggling through it.
I thought it's just my mood, so I set it aside. And read a couple of different books in between. Picked it up again... And the same thing happened. Over and over. I found it a task to finish.

Again I still think the world building is fabulous. It's really quite brilliant. And my favorite part of the book. I loved all the descriptions, the links to magic...well, simply all of it. And that's why I gave this 2.5 Stars rather than 1.5.

The plot, is slow pace, complicated and full of twists and turns. Though again, it is clever, I found myself being bored by it.

All of this I actually put down to the writing style. It felt a bit stogy and old fashioned. Though I love flowery language, I love old literature - and this definitely reminded me of some of my beloved classics... I missed the beauty of prose those said classics have.
Then and I think this is my absolutely biggest issue there were the multiple POVs. I like multiple POV. But here I simply thing less would have been more. There are too many character voices. It took away from the story flow but also more importantly, I think it made it impossible to connect to any character.
I really wish I would have like this more. I really do. But sadly it wasn't meant to be.
I might one day pick up the second book.. who knows? As I said, the idea behind this? Brilliant