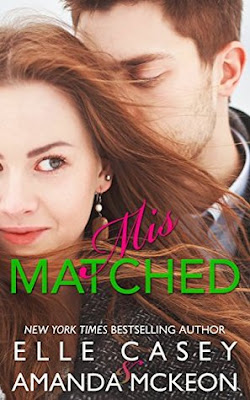 Former college roommates Erin and Ridlee leave Boston for Ireland to track down an inheritance, and end up at a matchmaking festival in Lisdoonvarna.... Ridlee's a newly minted attorney, and Erin's part owner of the Pot O' Gold Pub, hoping to buy out her new, mysterious partner, some old Irish guy she'd never heard of before the reading of her late grandmother's will. It seemed like it would be an easy thing to do: show up, find the bloke, and make him an offer… But the magic that is Ireland and the people who speak the lilting Irish brogue are as unpredictable as the weather, and things get a little more complicated than the girls anticipated when the town's legendary matchmaker pulls out his leather-bound book and proposes two matches…

Mismatched and I did not get on the right foot when we started off...
I just didn't feel it. I wasn't even sure what it was... I just couldn't deal with it.
So just put it aside- I had a couple of let's struggle through it books before that. I simply just couldn't struggle through another one.
Then more than a week later I picked it up again. And wonder of wonders suddenly this was less of a chore and way more fun.
The first half of this seemed so cliche. The whole insta-lust....
Ridley's view of Ireland- and Erin's odd behavior about it
At about 30% I would have rated this a generous 3Stars at best, more like 2.5
And then somehow slowly Mismatched creeped up on me. And by 80% I found myself darn invested in Erin, Ridlee, Donal, Michael... well everyone really.
And even worse! At the end my first thought: Hey, wait what? That can't be it? It can't be done yet?!!
I might have paged back and forth making sure I didn't miss anything.

BUT the second half was way better for me than the first third and I want more! (PLEASE TELL ME THERE IS MORE??!!)
So I guess this is 3.5 Stars really.

I think the character building is done splendidly. I honestly didn't like Erin much in the beginning. In fact I found her very annoying. It did change as the story went on. She really grew on me, the more I got to know about her the more she made sense and the more I actually liked her.
I am not sure how I feel about Donal btw.. I mean with him just fading out the way he did. And let me just put it out there in case that was missed. I want more. Specifically more of Donal. Just saying
.
I loved the crew in Ireland. It was fun and while at first I was a bit worried that it will be totally full of typical tourist conception. I was delighted to find I was wrong (ok,so in my defence: I didn't realise that McKeon is Irish) I came to love Lisdoonvarna and most importantly it's inhabitants.
I adored all of the descriptions of Ireland and of Boston as well ( which by the way I still haven't visited- it is on my never ending bucket list!)

The storyline is quirky. A bit of cliche and has a few twists and turns thrown in I really didn't expect- many that I totally did. Very nice cute and fluffy indeed.
It has a few insta's all over it. But quite frankly- I met Mr. O while I was traveling- I am a bit biased when it comes to meeting your guy while traveling... well actually maybe a lot biased. I think since I am so negative inclined towards the insta..well, insta-everything.. we can actually disregard my bias, it probably about balances it out.

One comment on the whole odd Irland thing: I honestly can't relate. Maybe because I am not American? Maybe because people from Heidiland (also known as Switzerland) are actually really quirky? Maybe it's because I am a total nomad, who has lived on several continents...
Or maybe because I just never expected Ireland to be anything I knew but simply loved discovering what it was? I really am not sure, but I found myself wondering why anyone would go to Ireland and expect it to be like anywhere else? (i.e. the US?) *shrugs*
Anyway.

Last but not least: the cover slut in my was total sold by that cover. And after reading this... sigh.. I even approve more (totally Erin....)

I want more! Please publish the next book FAST!