ARC Review: You're Still The One by Sasha Clinton 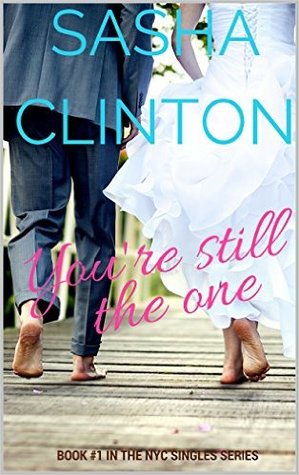 You're Still The One

One love. One man. Two chances.

Ashley has her life sorted out. After a painful divorce, she has now rebuilt her life as an editor. She is happy with her life—until her ex-husband Andrew walks into it, opening up the deep scars that even time has failed to heal.

He’s gorgeous, funny and as utterly tempting as he was seven years ago. Plus, being the editor for his new book, she cannot avoid him. But Andrew has his own issues lingering from the past.

Bound together by work, every breath they take draws them closer, into the same hopeless, passionate love that they once shared...

When I read the blurb of this, I loved the sound of it. It's set in NYC - one of my favorite cities in the world. It sounds like there won't be any instas going on... I knew that this could go one of two ways- I love it or loath it.

Well, I was wrong. On many accounts. First I neither love it nor loath it. I am not wowed for sure, but I also didn't hate it. It was just.. kinda awkward actually.
Look it's not terrible or infuriating, but it just never gelled with me.

First of all, the romance? INSTA all over. I could have lived with that. But I didn't buy it. They had no chemistry. Even if Clinton kept stressing that they did- well I didn't feel it.
Then the smut- was beyond awkward. It was odd and felt super wooden. Not enticing or sexy or hot. It felt rehearsed and planned. As in Clinton added some odd bits to make the couple more real or unique... BUT it felt like it was planned and more importantly it just felt off and weird.
They supposedly so in love. But I really didn't get any of that. I mean they professed to strong feelings, I just never I felt nor did I actually believe it.
Their infatuation felt superficial. Their big fight and the break up? It felt staged. And the supposed hurt of Ashley? What hurt? I felt it more in the blurb than reading the entire novel.

The character building felt labored. I mean, Clinton gave both MCs quirks and bad sides... but that's how it felt. Like their weaknesses were planned. Like Andrew's problem at the end? I felt like smacking him. Seriously, get real! It felt totally put on- so that we can have a last big drama...you know the perfunctory one before the end.
My biggest issue with the character building was, that Ashley and Andrew behaved rather juvenile most of the time. Their actions and reactions seemed to be rather arbitrary at times. Just like teens. But see we talking adults, first they in their early twenties then in their early thirties.. and frankly I just kept thinking grow the heck up people!


The plot was okay. I guess. A tad cliche. But actually not bad. This could have been a good cute & fluffy.

But I think my absolutely biggest issue with You're Still The One was the writing style. While Clinton does very flowery descriptions- they quite nice actually- the dialogues were totally wooden. Somehow they felt staged rather than a conversation. Then going back to the whole flowery descriptions- they didn't work in the context most of the time. I am not sure why. As I said, Clinton writes quite nicely. But somehow it just didn't work for me. I missed depth and soul- and saying that I have to stress, that I feel like Clinton did try and portray that. BUT I could simply not connect to it. It surprises me, because I usually love beautiful descriptions- but here it felt put on. The New York Clinton described, was not my experience of New York- Just some details felt off. In fact I was wondering if she actually has been there.
It seems my recurring problem with this novel. I simply didn't feel it, I just couldn't connect. At all.

So while I wish it would have worked better for me. I think the concept was interesting, sadly not for me though.