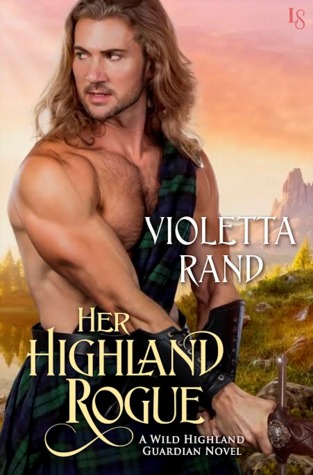 Errol MacRae’s days of gallivanting across the Highlands are nearing an end. His father’s health has taken a turn for the worse, and rumors are swirling that the crown intends to transfer ancient lands into the hands of the MacKenzies, the clan the MacRaes are sworn to defend. Errol expects to lead his men into battle soon. So he isn’t pleased when his father instead sends him to retrieve a beautiful flame-haired lass who has fled into the mountains.

Orphaned as a young girl, Aileana vividly remembers how the MacRaes rescued her and welcomed her into their clan. For ten years, she has served them loyally—until the night she’s nearly despoiled by one of the laird’s captains. Aileana risks her life and her reputation to seek refuge in the snowcapped peaks of the Five Sisters, the one place that has always felt like home. But after the strong-armed, strong-willed Errol tracks her down in a blizzard, she finds herself tempted to risk something even more dangerous: her heart.

I read this because I was promised a book similar to Monica McCarty's Highland Guard series.
It's no secret that I have rather opinionated views on Highland romances. Most of the time authors get it terribly wrong in my opinion. McCarty however gets it really right.
So I was a tad bit apprehensive when I started Her Highland Rogue. Thinking I could really love this or utterly hate it.
Well the good news, I didn't completely hate it. I was just a bit underwhelmed. It's not bad, but expecting something like McCarty's books, Rand didn't live up to my expectations.
See McCarty's books shine with three main aspects: first the character building. Second the clever way she immersed her fiction into historical events. Third and in my opinion most importantly her writing style. Her description of Scotland make me each and every time feel like I am there again... Oh did I mention I lived in the Highlands for a while? As I said, I am a difficult customer.
Sadly Rand didn't excel in either of those aspects.
I found Rand's writing style at times a bit awkward, there were no descriptions of the surroundings that are worth mentioning nor is there any historical aspect to this and I really wasn't a huge fan of the character building- though it's the best of the three.

The plot is actually my favorite part of this, even if it is kinda predictable. It had a nice flow and I liked that there wasn't a complete happy clappy end.
The romance was uhm, a bit sudden? A bit odd. First the hero thinks she is annoying, then he loved her all their lives. Which one was it now?
I didn't feel any chemistry between them. The smut was ok, again I didn't swoon or anything.

The first half of the novel I found myself irritated with the characters, they were both kinda naive and childish- it took me a while to get into the book because of that. I was even contemplating if I should DNF after the first 10%. Thankfully I did follow my 20% rule. Because a quarter in I found it not half as annoying. I actually really enjoyed the second half.
I guess one can credit it to the character growth of the two MCs. They kinda did not only grow on me, they actually became rather interesting and fun.

So all in all I think this is an okay Highlander Romance- which is more that I can say for many others. But it didn't meet my admittedly extremely high expectations.

However if you looking for a light Highland Romance give it a go!

Would I read the next book in the series? Probably, simply because the second half of the book was actually not half bad!