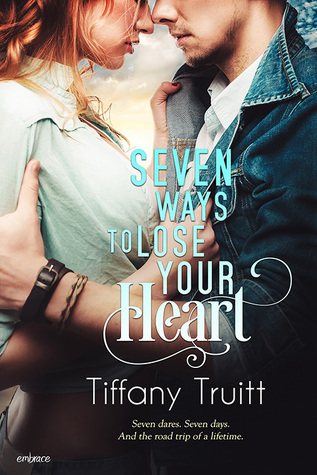 Seven Ways to Lose Your Heart

In the span of seven days, Annabel Lee will lose her heart.

Kennedy Harrison, as reckless with life as Annabel is obsessed with order, never could commit to anything—not to a person, not to a job, not to a path. But he’s got a history with Annabel, and for once Kennedy doesn’t want to run. Determined to spend time with her before she leaves for college, Kennedy dares her to join him on a road trip to a music festival.

And neither of them could ever say no to a dare.

But Annabel’s got a plan. She’ll complete seven dares in seven days—if Kennedy applies for one writing internship per dare. Because Kennedy needs to be pushed just as much as she does.

What follows is a dizzying week of music, shady hotels, comical dares, and a passion neither one knew existed. But when it ends, Annabel and Kennedy will realize the biggest dare of all might just be falling for each other.

Seven Ways to Lose Your Heart is simply put a great cute & fluffy.
If you wanna know why I read NA romances, this would sum up exactly well.

It's well written, witty and has a fabulous storyline but first and foremost the character building is fabulous!

This is the first novel I read by Tiffany Truitt. In fact this is her first NA novel. I fell in love with her beautiful descriptions and I love her prose- so I am hoping she will be writing many more NA novels in the near future

In the beginning I was actually worried I wasn't going to like the story line. I thought there would be a terrible love triangle but I didn't mind the little bit of triangling going on. And since I totally loathe them this simply shows how well it was written. It also had a lot to do with the character building, which I will discuss later. They end up going on a road trip, taking photos and going to concerts- see why I liked it? It's the pinnacle of what I adore. I am a total music lover, photographer and eternal nomad. Truitt basically threw my favorite things into the thick, because there are books as well... Then there are the past and present threads that are woven together, which explains their rift and also makes one understand current issues.
A cute and enticing rollercoaster with great elements and depth. Great storyline

As I said before all of this though was held up by the character building. The story is told from the POV of Annabel and Kennedy. Both voices are distinctive. And through it we get to know both MCs very well. I could relate to both of them. Found both exasperating at time yet adore them as well. At the end of the book I felt like I knew them. This extended to the support cast. Each one is unique, multilayered and I felt like I got where they were coming from and who they were.
The chemistry between Annabel and Kennedy is tangible and their closeness felt real, more in fact. It felt right and inevitable.
Brilliantly done and all of it was shining through the different relationships both MCs have with other people. It was my absolute favorite part of the book, all the different relationships their intricacies. It's so well done, which makes it an absolute pleasure to read.

A must read! Solid 4 Stars.