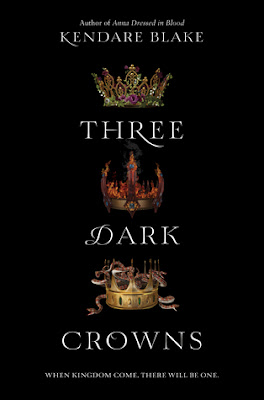 Every generation on the island of Fennbirn, a set of triplets is born: three queens, all equal heirs to the crown and each possessor of a coveted magic. Mirabella is a fierce elemental, able to spark hungry flames or vicious storms at the snap of her fingers. Katharine is a poisoner, one who can ingest the deadliest poisons without so much as a stomachache. Arsinoe, a naturalist, is said to have the ability to bloom the reddest rose and control the fiercest of lions.

But becoming the Queen Crowned isn’t solely a matter of royal birth. Each sister has to fight for it. And it’s not just a game of win or lose…it’s life or death. The night the sisters turn sixteen, the battle begins. The last queen standing gets the crown.

If only it was that simple. Katharine is unable to tolerate the weakest poison, and Arsinoe, no matter how hard she tries, can’t make even a weed grow. The two queens have been shamefully faking their powers, taking care to keep each other, the island, and their powerful sister Mirabella none the wiser. But with alliances being formed, betrayals taking shape, and ruthless revenge haunting the queens’ every move, one thing is certain: the last queen standing might not be the strongest…but she may be the darkest.

Three Dark Crowns had much promise, but alas it didn't quite work for me.
And if I should point out why exactly I draw a bit of a short answer.
Basically the idea of this is simply brilliant.
The world building is awesome. I love the world Blake created. It's dark and imaginative, yet beautiful and interesting. AND I wish that this would be enough for me. Alas aparently it isn't
I love Blake's prose. I think she is an incredibly talented and imaginative writer. And there are beautiful moments here, again the idea behind this is fabulous.
But ... sadly there is a but.
The plot was exceedly slow. There is all this build up there are all these detail and I kept expecting... something... anything..MORE. But while all of the this is rather clever I could see all the twists and turns coming from a mile, in fact I kept waiting for them to happen, for so long, that when they did happen I felt more like FINALLY, than any surprise or even interest.
Then, and this is probably my biggest problem with the novel, there is the character building. Look in theory, again this is solid. The characters are well thought through, well crafted. But I couldn't bring myself to care.
And here is my biggest surprise as well, because I can't really fault Blake for the character building or the plot. I can't even point out exactly why it all didn't work, but it simply didn't.
I really really wish I would have liked it better. I kept wondering why it felt rather like a chore to read this, than fun. I kept thinking maybe it's my mood, set the book aside, reading other books in between. I struggled through Three Dark Crowns. And at the end, I like this IN THEORY. In practise however, I have to admit if this wouldn't have been an ARC, I would have DNFed around 50%. And now thinking about it for an entire day after finishing, I am still not quite sure why that is the case. I think maybe it feels too much crafted rather than organic?
Will I read the next book? Possibly. I love Blake and I still have lots of hope that this will get way better. The series has huge potential. But at this point I am frankly in no rush to read the next installment.
Should you read it? Yes. Because I honestly think this is well written, the world building is brilliant and the idea is fabulous, and while this hasn't worked for me, many of my GR friends have loved it.