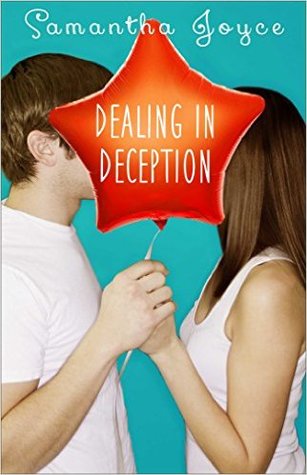 In this companion to Samantha Joyce’s Flirting with Fame, Veronica Wilde finds that playing make-believe isn’t all it’s cracked up to be—especially when it’s keeping her from pursuing the one man who makes her heart go wild.

As an actress-for-hire, Veronica Wilde has made a living out of pretending to be other people. It’s the one thing at which she’s always excelled: taking on someone else’s personality and running with it. So after Elise Jameson, author of the bestselling Viking Moon series, decides she no longer requires Veronica’s services, she needs to find a new gig—and fast.

But when her newest client hires Veronica to help him make his small business look more successful than it actually is, the sparks that fly between them are definitely not part of the act. Suddenly, Veronica finds she’s tired of playing pretend for a living. She’s been acting for so long, she’s blindsided by the one man who sees her for who she really is. And the most terrifying part? She might actually like it.

I think I might like this even better than the first? Mmmmhhhh ...ok then again. Maybe not?
While I can't tell you which one of the two Love in Disguise novels I like better, I can tell you with certainty I like them both.
Dealing in Deception feature the villainess of the first book. It is set at a later time, we get a few glimpses of Gavin and Elise, but really DiD could easily be read as a standalone.

Like Flirting with Fame this is a slightly different kind of romance. With that I mostly mean the MCs.
The story line is cram-full of cliches, just like FwF was. But somehow Joyce takes an oldie theme (a goodie to be clear), throws in a bunch of well used cliches and makes it her own. There are beautiful insightful and inspiring moments here. And yet it is lighthearted and funny.

I think all of this shows Joyces talent as a storyteller. Her writing style is easy, simple and straightforward, yet she inspires with her descriptions and is on point with her insight. All of this is tied together with excellent character building.

And to be honest, while I like the story line, I absolutely and utterly adore the characters, with ALL the flaws. I mean some of them are a tad over the top, which makes them kinda cliche. Starting with Bax, who I completely adore btw. But he is your typical goody good doer. Well, at least half the time. Then Joyce shows sides and layers to him that make him so human and kinda real. It's actually kinda freaky, but I related to all the characters in both books so much, I honestly feel like I know them all. That goes for the support cast as well. I think, Joyce using the well known usuals, then adding her own twist to them, kinda makes one get to know them faster and relate better. As I said, brilliant.
Veronica is fabulous. I loved her in FiF and knew exactly where Joyce was taking her in this book. (especially with how things ended in FiF and Elise kinda spilling the beans.) BUT I didn't expect to love her this much. I totally related to her. I mean we all have the scared mean girl in us, at least to a degree. I love how Bax and her slowly change and fell for each other. The character growth of the MCs is inspiring.

Just like the first installment of the series, I was left to ponder over the deeper issues Joyce has touched on. Let's face it, the likelihood that Elise would have ended up where she does in the series, is small. The same goes for Bax and Veronica. But this is fiction! And more importantly I know there are people out there that are like Elise, Regina, Clint, Bax and co.
Bax with his ambitious goals and his great invention, might not exist in RL (does he? has the blanket been invented?) but people like him do. There are people who run shelters, volunteer and other who give to charity. Those are the kind of people I strive to emulate. I am touched that Joyce highlighted a reality we all too often forget. She did it with sweetness and kindness. Reminding us that there are wonderful people on this earth and that we have to help each other. All without being preachy or making a huge fuss about it.
THANK YOU!