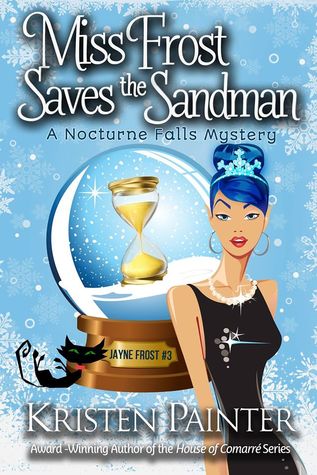 When the Sandman comes to Santa’s Workshop, the shop Jayne manages, to do his first ever book signing, it’s a major event. He’s kind of a supernatural celebrity and she needs to keep him happy.

All is well until trouble shows up at the party thrown in his honor. Trouble in the form of Luna Nyx, the Mistress of Nightmares and his creepy counterpart. The Sandman’s assistant says Luna is dangerous, and Jayne believes it when her dreams turn dark.

Can Jayne keep the Sandman safe from this gothic goddess? Or will Luna’s threats put them both to sleep for good?

As I was reading this two things occurred to me:
I keep thinking of this as a PNR. Basically I expect a standalone romance a la Nocturne Falls. The Jayne Frost series is simply neither. These are not standalone novel nor are the romances.
These are more what I think one could describe paranormal mysteries They have this cool little Agatha Christie meets paranormal vibe going. I enjoy that immensely. So once I let go of my expectation of romance, I really got into the story.
The other thing however, going to back to the romance part: I am just not into the love triangle we got going here. Because I don't much fancy either of the love interests. It puts a bit of a damper on the entire story. But while I let go of the romance expectations at least somewhat, let me just say this; I actually think Lucien would be a much more interesting subject. Just saying.

For me this is definitely not going to work as standalone, unlike the Nocturne Falls series, which is why I even bring it up. This should be read in order of the series, I also think it makes the books more enjoyable,since each book is a continuation of the previous one, even if we get a new mystery in each one.I found there was a lot of repetition in this book, explaining past stories. It slowed the first third of the book down for me, add to that the world building.. and the first third was considerably slower that the previous books. I would have prefered less explanation of past stories. Actually there was way less action in this one than in the previous ones.
I did however really enjoy the story. And I really got into the plot.
Gotta just say that I guessed who the culprit was right off the cuff. And I found Jayne's assumptions a bit frustrating, I kept thinking she is judging a bit too fast The solving of the mystery was a bit to rushed for me. I mean I still feel a bit iffy why the culprit did, what was done? And what happened to the other two? Basically I was left with a few questions. I do hope that they will be answered in the next installment.

The world building of the series has been consistently innovative and interesting. And Painter does deliver once more. And I am really looking forward to what Painter will add to the awesome world of Nocturne Falls next!
I have read a considerable amount of novels by Painter. And just like always I enjoyed her writing style.

As I said earlier, I am not a huge fan of the love triangle, then again I never am one for love triangles. But in this case, I am just not that smitten with any of the male love interests. I mean I like them well enough. They are interesting, well constructed characters. I just am not swoony over them.
Somehow I think they are too archetypal both of them for my taste. This is just personal preference. Yet I do love the character building.
Painter has done a great job at creating an interesting group of people. I like Jayne, though I find her a bit exasperating at times. I kinda feel about her like one does with an old friend. I know her shortcomings but adore her anyway, and am more than happy to overlook them. She feels real and relatable, even if she is a winter elf.
I can't wait to read more about her adventures and the entire support cast. Especially considering the ending of Miss Frost Saves The Sandman. While it isn't exactly a cliffy. Not at all. But it did blow things right open. And I am quite anxious to see where Painter is taking the story next!
Also I would like to just mention, that I really really hope there will be more about Lucien..