Review: All the Forever Things by Jolene Perry 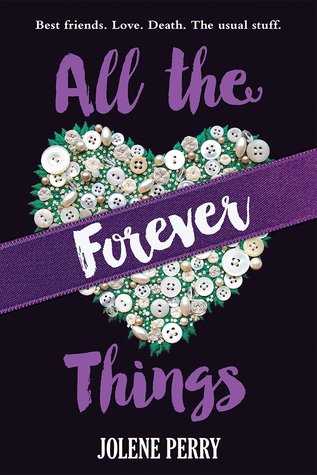 All the Forever Things

“How many times have you saved me?” I ask Bree.

She grins. “Don’t you mean how many times have we saved each other?”

Nothing is forever. Gabe knows that more than most girls. After all, she lives in a funeral home (it’s the family business), and she gets that everything in the world dies eventually – people, rumors, fashion trends, the nickname “Graveyard Gabe.” But her best friend, Bree, has been a constant in her life; it’s always been the two of them together. Until Bree starts seeing a guy who stands for everything Gabe thought they were against. How could Bree change her mind and go for someone like Bryce Johnson?

Now Gabe doesn’t know who her friend is anymore. And the only person who seems to have time for her is Hartman, the new guy, who is somehow not weirded out by the funeral home stuff (well, a little). Still, Gabe doesn’t want to lose her mind over a guy the way Bree has, so she holds back.

But a very strange prom night (driving the family hearse instead of a limo) will change what Gabe knows about friendship, love, life, and everything that comes after – forever and otherwise.

I like the idea behind this book.
I loved the blurb. I expected quirky, and some of it was. But most of it was kinda, well, blah. At least for the first half. The third quarter picked up a bit and the last quarter was what saved this book for me.
I didn't like Gabe much in the beginning, she did grow on me. Rather slowly mind you. She was too self involved and very imature. Though she is only 16, I tried to give her some slack for that but despite that she felt immature and also much younger. She does do some growth though which is what totally endeared her to me at the end of the book.
The support cast is in some ways quirky but when one scratches at the surfaces they take on the normal roles we get in basically every YA contemporary book.
The only difference here and what kept me going was the recurring theme of loss and death. It gives the book some unexpected depth. It is also what kept me going, when I was pondering if I should DNF 30 or so % in.
The first half felt incredibly long wound and like it was trying too hard to be different. Barely anything happened other than Gabe having internal and not so internal dramas.
Perry did an interesting take on death and loss. Retrospectively I like how she set it all up, even if I wasn't a fan of it in the first half. And she turned it around as well, looking at the question of living. The question of change and friendship were raised. Hartman was such a great contrast to Gabe when looking at life. I love how Perry made them reflections to each other, so similar yet coming to a totally different view.

"Forevers are personal, Gabe. My father's existence may not matter to a star a million miles away, or even to someone else who lived on my street. But my father's life was so much to me. The way I live my life will always be influenced by knowing him. So, in my world, my father is forever. In my world, that time we spent on the beach is forever. I will never forget that. Forevers are everywhere."

It's worth giving it a try, because while something are the usual usual other parts are so different, unexpected, insightful and beautiful.

I am giving 3 Stars, because the first half was a generous 2stars, the 3rd quarter 3 and the last bit probably 4Stars.