Blog Tour: The Runes of Issalia by Jeffrey L. Kohanek

Check out my tour stop for The Runes of Issalia series blog tour! There is an excerpt and giveaway below. 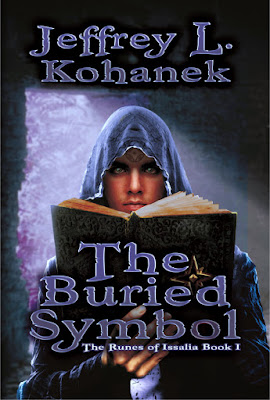 The Buried Symbol (The Runes of Issalia #1)

Without a rune marking his role in society, Brock is doomed to an existence below the lowest rung of the social ladder. Unwilling to accept his fate, the teen risks his life to obtain a fake rune that marks him as a member of the Empire's ruling class. He then embarks on a quest to join an institution where the Empire’s future leaders are trained.

As a student of the Academy, he soon uncovers a chain of secrets kept hidden for centuries, secrets that expose cracks in the foundation of Empire society. Among his discoveries is a powerful magic, long buried and forgotten.

Brock’s compassion and sense of justice are seeds that sprout tight friendships and a blossoming romance. An unwillingness to be bullied earns him a dangerous enemy, becoming a feud that escalates to a climactic showdown. 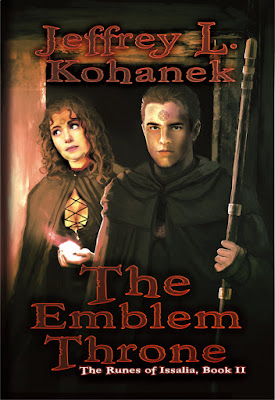 Journey on a magical quest to save the world...

As they strive to become Masters within the Ministry, Brock and his friends resume their training at the Academy, an institution founded on magic, science, knowledge, law, and combat. They soon discover an expansive web of conspiracies and deceit within the Ministry, hidden behind a veil of benevolence and piety. The exposure of one of those secrets forces Brock and his friends to flee the institution with their lives in the balance.

Joined by a fierce Tantarri warrior, the group embarks on a quest to locate a mysterious throne that has been lost for centuries. Guided by the cryptic words of an ancient prophecy, and backed by a forbidden magic that they are still learning to wield, they journey across the continent to save humanity from extinction. 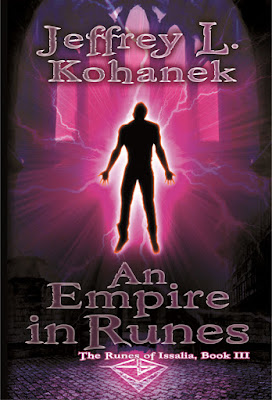 An Empire in Runes (The Runes of Issalia #3)

Led by a boy named Brock, a small team of teens urgently assembles a force to confront an army of monsters, one that ravages and destroys anyone or anything in its path.

In a race against time, Brock attempts to train a group of recruits to wield the powerful magic known as Chaos, a magic that he himself is still learning to master. All the while, they must remain vigilant against a secret organization within the Ministry that will do anything to prevent the return of Chaos.

As foretold by an ancient prophecy, the human army must face and defeat their ancient enemy on the Tantarri Plains. For if they fail, all will be lost.

Amazon Buy Links: The
Buried Symbol | The
Emblem Throne | An
Empire in Runes

Here is an excerpt from THE BURIED SYMBOL. This is a short scene
that takes place after Brock and his friend Tipper take refuge in a cave when a
rain storm interrupts their journey to the Academy.

A noise woke Brock, who
sat up to find his clothes still damp. He rubbed the crust from his eyes and
blinked to shake the cobwebs from his brain.
Recognizing
his surroundings, he remembered the cave they had found to escape the rain.
Early morning light emanated from the entrance, shedding light on Tipper, who lay
asleep beside him. In the dim light, Brock noticed something near Tipper.
He
leaned close to get a better look, finding bones he hadn’t noticed in the dark
of night. Near the bones, rows of four parallel lines marked the surface of the
rock. His chest constricted as he realized that something lived here, something
large.
A howl
echoed in the forest outside the cave.
Brock
urgently shook Tipper.
“What?
What’s happening?” Tipper blurted, sitting up in confusion.
“Shh.”
Brock whispered. “Be quiet. There’s something out there.”
Tipper
rubbed his eyes. “Huh? What are you talking about?”
A
shadow eclipsed the light at the mouth of the cave. As Brock turned toward the
entrance, his breath caught in his throat.
Against
the light of the morning sky, the silhouette of a massive four-legged creature
blocked the opening. Whatever it was, they were in its home and it was angry.
A low
growl sounded, its ferocity rumbling in the small cave. The boys backed away,
and Brock stumbled when he collided with a boulder near the rear of the cave.
He scrambled to his feet as his mind raced. The beast blocked the only exit.
Like the banshee attack at Glowridge Pass, they were trapped in a hopeless
situation with no way out. His mind drifted back to that event and he reacted.
Brock
scooped a bone from the cave floor and began scraping a symbol on the boulder:
the same rune he had drawn on Hank.
The
creature stepped forward, and Brock noticed the beast’s eyes, glowing an angry
red. The smell of wet animal filled the cave, mixing with the smell of fear
from Brock and Tipper.
Spurred
by desperation, Brock closed his eyes and began pushing with his will. He felt
the same force as last time, just beyond himself. Pushing harder, he latched
onto it and his body grew flush with hot energy. A storm raged within,
threatening to destroy him. He opened his eyes and poured the energy into the
rune. It glowed bright red, pulsing as the boulder began to shake.
Brock
backed from the advancing creature into the rear of the cave, against Tipper’s
cowering form.
The
boulder suddenly burst. Bits of rock pelted him, cutting hands held up to
protect his face from the beast. The creature leapt back from the blast, dozens
of small shards hitting its face and body. It growled in rage. Brock lowered
his throbbing hand to see what had happened.
The
boulder moved toward the beast. The round headless body of the rock advanced on
four legs made of stone, emitting crunching and grinding sounds with each
movement.
The
hairy beast attacked, swinging vicious swipes with its huge paws. Sharp claws
scraped the hard surface of the living boulder and bounced off harmlessly. The
beast backed away, but the boulder continued to advance.
The
beast attacked again, with little result as the boulder relentlessly forced it
backwards. Suddenly, animal was outside, its red eyes squinting in the pale
light of pre-dawn. It made one last swipe and then bolted.
The
boulder turned the corner to give chase, one leg stepping over the edge, and it
disappeared. The rumbling and crunching sound of a small rockslide followed as
it tumbled away.
The
cave became silent.
“What
in the blazes? Brock, what did you do?” Tipper shouted. “What was that thing?
What’s happening?”
“I
don’t know!” Brock yelled back. He was breathing heavily, trying to calm himself.
“I don’t know, Tipper. I had to do something, and it just came to me. I don’t
know what it is.”
“It’s
like what happened with Hank. You did it again with that big rock,” Tipper
said.
“Yeah.
I know,” Brock replied. “I wish I knew what it was, but I don’t.”
Brock
grabbed his pack and headed toward the entrance. “Let’s get out of here before
that thing comes back.”
Stepping
outside the cave, he looked down. The rock-thing lay at the bottom of the
outcropping, its legs broken off with the pieces still twitching. A shiver went
down Brock’s spine.
“That’s
creepy,” Tipper said.

Nodding,
Brock began to climb down as the first rays of morning sun streaked across the
valley.

Jeffrey L. Kohanek grew up in rural Minnesota, where comic books sparked his young imagination and inspired fantasies of heroes with super-powers saving the day. His tastes later evolved to fantasy epics, featuring unlikely heroes overcoming impossible odds to save worlds born from the writer’s imagination.Now residing in southern California, Jeff uses that imagination to weave tales of engaging characters caught in fantastic plots to inspire young adults and the child within us all. His first book series, The Runes of Issalia, began in May 2016 and will conclude in Spring 2017.