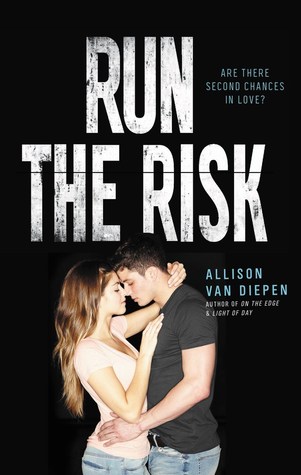 Set in the same world as On the Edge and Light of Day, Run the Risk is a romantic, gritty story about the dangers one girl faces to save the people she loves.

Grace has done her best to move on since her ex-boyfriend, Mateo, chose gang life over her. But even though years have passed, she hasn’t forgotten him—especially since she’s seen her younger brother, Alex, drawn to a life on the streets. She can’t bear to think of Alex making the same mistakes as Mateo, but she feels him slipping away.

So when Mateo suddenly resurfaces, insisting he’s left gang life behind him, Grace sees an opportunity. Maybe he could be the one to reach Alex and pull him away from the edge. She tells herself she’s only talking to Mateo again because of Alex, but her feelings quickly return. Can she ever trust Mateo again? And is saving her brother worth risking a broken heart? With everyone she loves in danger, Grace must decide how much to sacrifice before it’s too late.

Run the Risk is interesting because it kinda straddles several genres. It is a romance and has some cute&fluffy moments, but it's also an action story, which get get plenty and then it also is socio-critical in that it shows aspects and issue of gangs.
I applaud van Diepen for trying to add depth to a romance novel and for shedding light on the aspects of gangs. The reality is gang-affiliation is a huge issue in many big cities, especially in the less privileged areas.
But at the same time, van Diepen's try on straddling two such opposite things is kinda what didn't work for me. It was either not deep enough or not cute & fluffy enough. To be frank while I read the book, expecting a cute kinda romance, it was lacking in the later for me. Retrospectively I am not so sure that would be necessary the way to go. Alas I feel as it is it's not quite working

The character building is interesting- if this would be a cute&fluffy I would have been quite happy with it actually. But as it is, I felt that several characters were not developed quite enough. I found Grace's stubbornness a bit annoying. We never found out why Mateo was doing what he was doing. Which I found a pity. I'm not for vigilante behaviour. But I doubt that Mateo was frivolous, I feel that she should have at least let him explain what they do and why he actually joined. Even though we got some explanation, I felt it wasn't enough. Still I find Grace's black and white view rather condescending. I think one should give people a chance to explain, one never knows why someone ended up where they did. The way this issue was dealt with was a bit disappointing. I guess van Diepen was trying to send a message, but having worked with many people from the kind of areas Mateo and Grace were from, I can only say life is not black and white.

The plot is fast paced, full of action and at times thought provoking.

Last I should mention, that I haven't read the previous novels in the series, which might affect my opinion in the negative. It is possible that the previous books would have shed light on my questions? Alas I shall read them, because while it didn't quite work as well as I wished, I also enjoyed this novel.