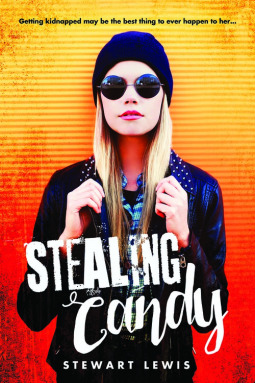 Candy hates boarding school. As a junior, graduation is still eons away, and making films is the only way to survive the boredom. Until she is kidnapped.

Candy panics. Along Came a Spider, Ransom, Taken, Cellular… Candy knows how these movies end. The only reason anyone would abduct her is to get a payout from her rock star father. Except Candy and her father are estranged. There’s no way he’s going to pay.

But with every hour that passes, Candy’s fear slowly recedes. Being on the road is freeing, not to mention great material for a new documentary. And the more time she spends with her handsome captor Levon, the more she learns the whole scheme is not just about ransom. It’s about revenge. What began as a kidnapping is spiraling into a crazy road trip adventure as Candy and Levon find a lot of wrong ways to do the right thing.


Stealing Candy is in many ways right up my alley. There is a road trip involved after all....

Lewis has written a witty and interesting book. I love his sense of humor and like his writing style. Stealing Candy is the first of his novels I have read, I plan to read more.

The story line unfolds beautifully, the pacing is done extremely well. I got a couple of issues with the plot: The first is that the kidnapping is a wee bit too much played down-( Hello Stockholm syndrome!)
The second the end... well, let me warn you, it's a rather open ending.
But at the same time, I really love the end! I also hope this means that maybe there will be a follow up book?

The character building is interesting. While I found Candy really opinionated and bitter in the beginning, I quickly warmed up to her, not her opinions mind you. I love her brand of sarcastic humor. More importantly Candy does change, she sees other viewpoints and her growth is staggering. It's my favorite part of the book. How the outward journey transforms Candy and how she discovers a whole lot. I think this speaks to my nomad heart, I like to believe that each trip and journey I took has changed me in at least some small amount. I am however sure, that each trip broadens one's view of the world and with that we become less judgmental and more accepting.
While I kinda adore Levon, I also find he wasn't quite tangible. He stayed a huge enigma and kinda felt not quite real at times.
The rest of the support cast do a fantastic job at supporting the MCs to show their states and make them shine. They transform from a tad typecast figures to interesting characters in most cases. Yet another thing I like. This was entirely written from Candy's POV so I think the fact that we get to know the support cast slowly through Candy's discoveries is proof of Lewis mastering his craft.

A heartwarming interesting story that left me with hope!